A Yogi is one whose hands, head, and heart (3 H’s) are in complete synchronization. I pray that we become true Yogis in our lives and lead a happy, blissful life. We have no choice, rather there is no reason we should lead a stressful life when we have already been given a solution by our ancestors.

Daaji went for a walk in his garden at 8 a.m. and then met a few seekers at home.

At 10.30 a.m. he left Kanha to address the ICAR–National Academy of Agricultural Research Management (NAARM) in Rajendranagar. The talk was titled ‘Krishi Becoming Rishi’.

Upon reaching ICAR around 11.15 a.m., he was welcomed by Dr R.C. Agrawal (Deputy Director-General, ICAR), Dr. Ch. Srinivasa Rao (Director ICAR), Dr. B. Neeraja Prabhakar (Vice-Chancellor) and their team, and was guided to the director’s chamber. Seeing the lush green campus, Daaji was very happy and he expressed his joy at being there. In turn, all of them expressed their happiness at his presence on campus. There was a short discussion regarding the prospect of conducting many training programs there in the future.

At 11.35 a.m. they proceeded to the auditorium block. The session kickstarted with Dr. R.C. Agrawal introducing Daaji to the audience and sharing a few details about his own visit to Kanha. He then invited Daaji to speak.

Daaji began by expressing his appreciation and gratitude to Dr. R.C. Agrawal and his team for inviting him to share his experiences and the philosophy of Heartfulness. He went on to share how he had come upon the title ‘Krishi Becoming Rishi’ for this particular talk, considering the genre of audience.

Speaking about the rampant pollution across the world today, Daaji stated that the main reason for this was people’s desire to earn more and more money. He said, “During one of His intercommunications with my Guruji, Lord Krishna mentioned, ‘Look, during my times, cows used to yield more milk. The crops were in abundance, and the soil was fertile. This is not the case today.’ I keep pondering if there is a solution to this pollution and erosion?”

He stressed charcoal as an important resource for water purification and the healthy growth of plants. As an example, he narrated details of the rapid transformation of Kanha from a barren land to a lush green campus, the development of borewell recharge pits, and so on.

Daaji then spoke about the importance of having a pure mind for work and personal life, and the role of meditation and Yoga in achieving this. He added that without meditation, human beings cannot achieve the highest state of consciousness.

Daaji stated that the next major research in the world would be in the field of vibrations. Explaining the importance of epigenetics, he shared details of the scientific experiments conducted in Brooklyn on pregnant women.

He said that Yoga is not just about strengthening ourselves physically, but it is also about tuning our consciousness to the higher consciousness, and this happens only through meditation.

Towards the end, Daaji asserted that creating a conducive environment is in our hands. The way we conduct ourselves – our being, our calmness, our thinking, our feelings – creates a certain level of magnetic feel within us, which radiates wherever we go. Then we don’t have to fabricate it, at any given moment, because we have now become that very environment.

He explained, “A Yogi is one whose hands, head, and heart (3 H’s) are in complete synchronization. I pray that we become true Yogis in our lives and lead a happy, blissful life. We have no choice, rather there is no reason we should lead a stressful life when we have already been given a solution by our ancestors.

After the talk, Daaji conducted meditation for about 20 minutes. This was followed by a short question-answer session, after which Dr. Srinivasa Rao gave his vote of thanks and honored Daaji with a bouquet of flowers and a memento.

It was heartening to see many of the faculty members interacting with Daaji and seeking clarifications as he walked towards his car. Daaji invited all of them to Kanha. 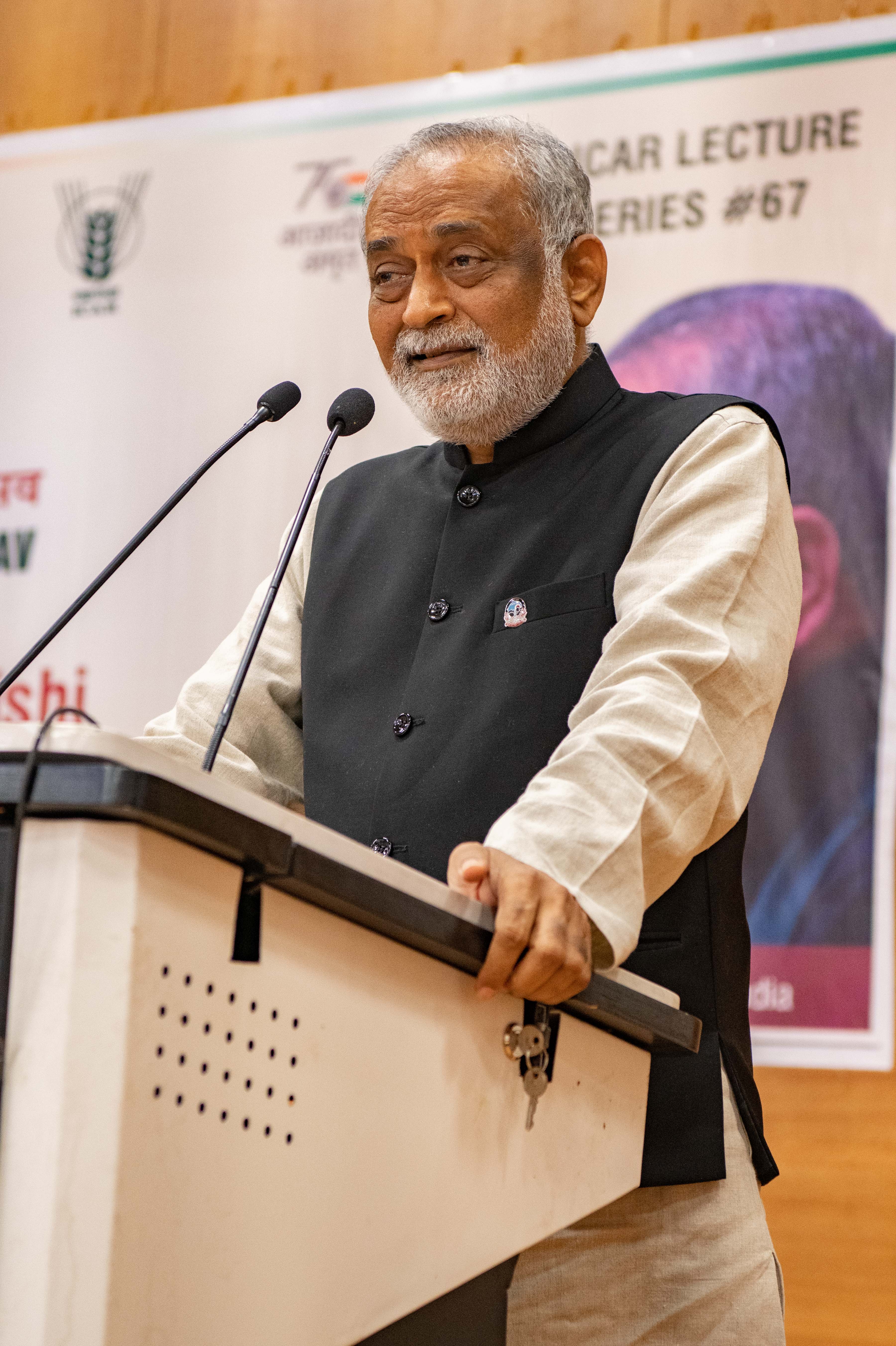 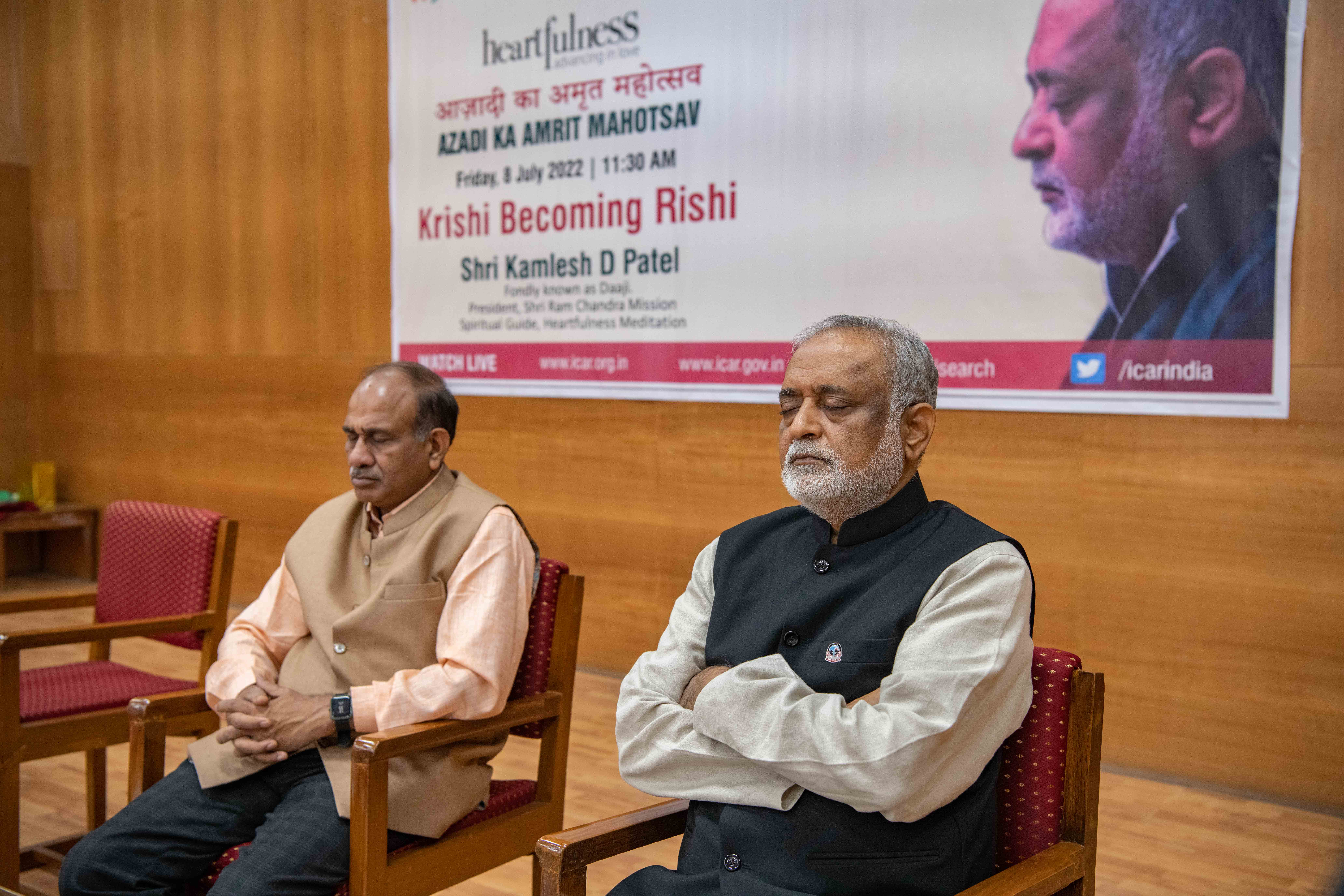 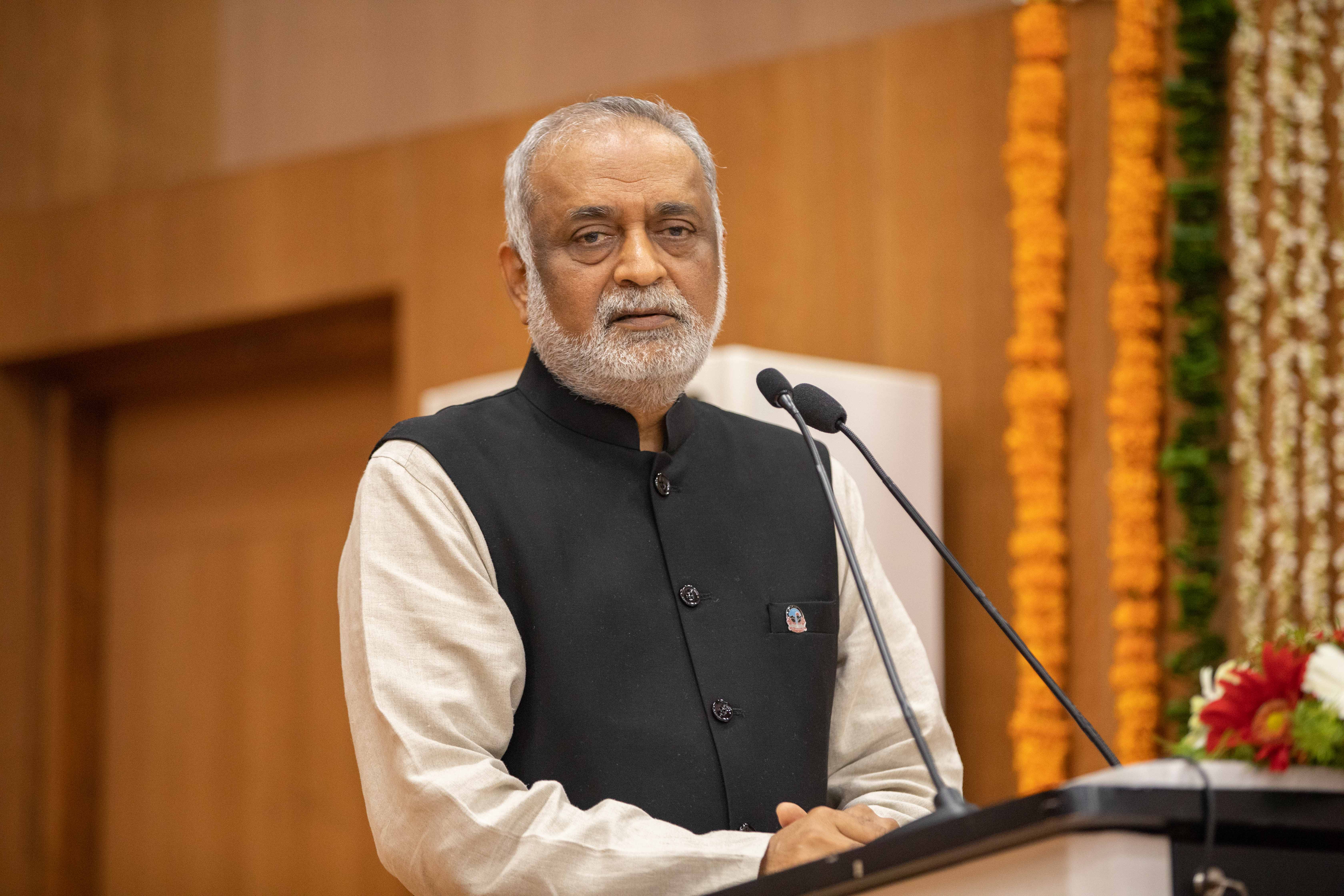 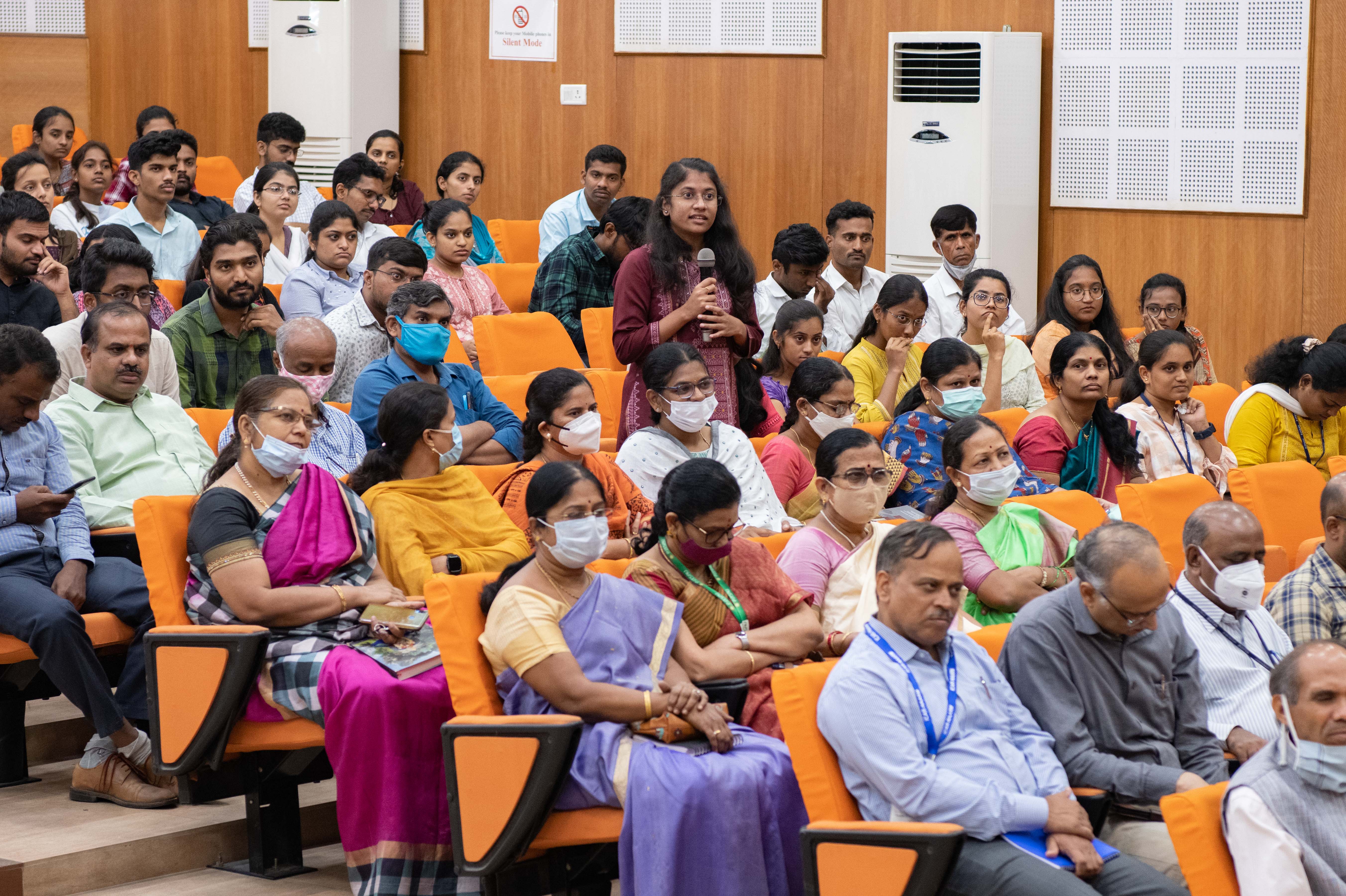 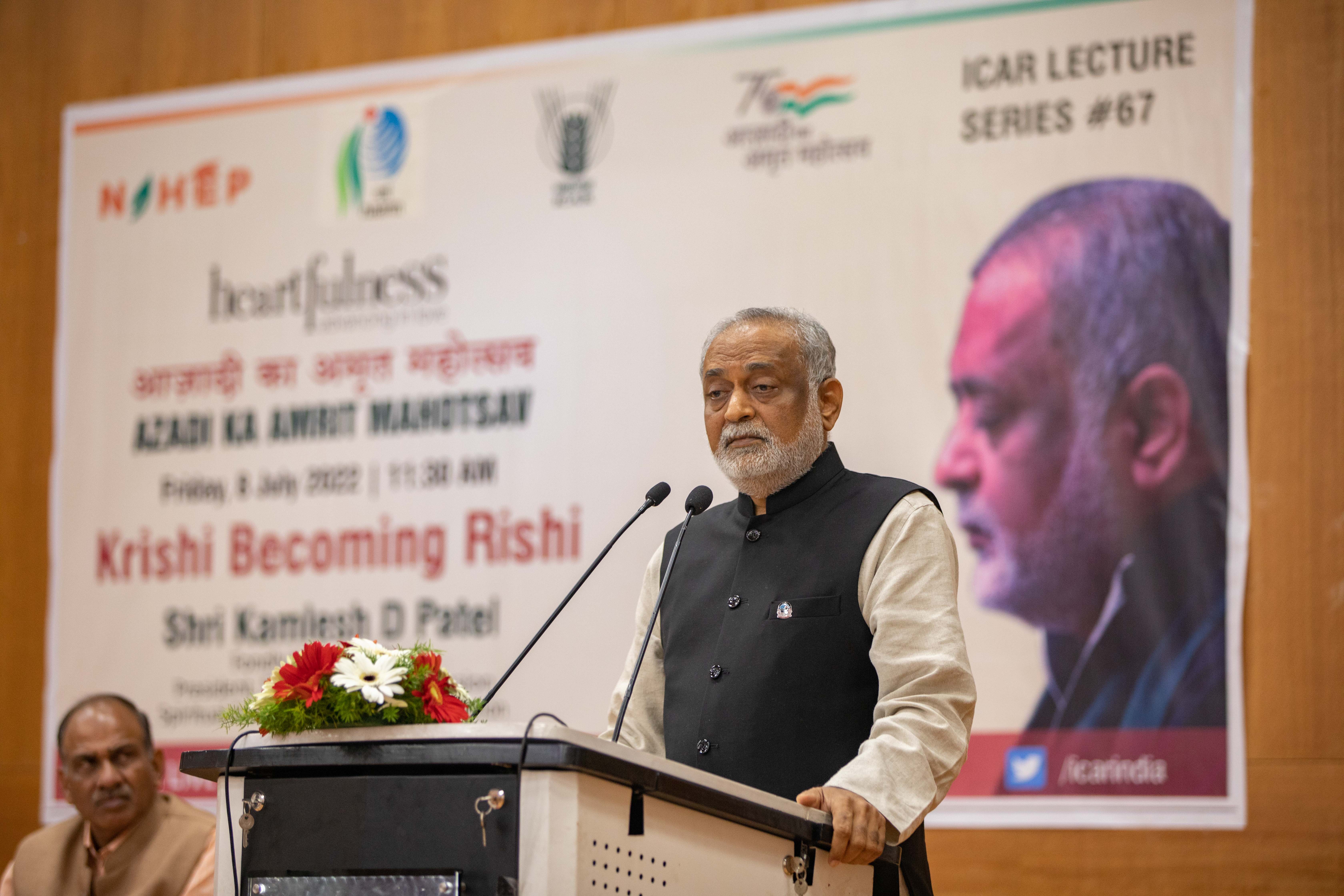 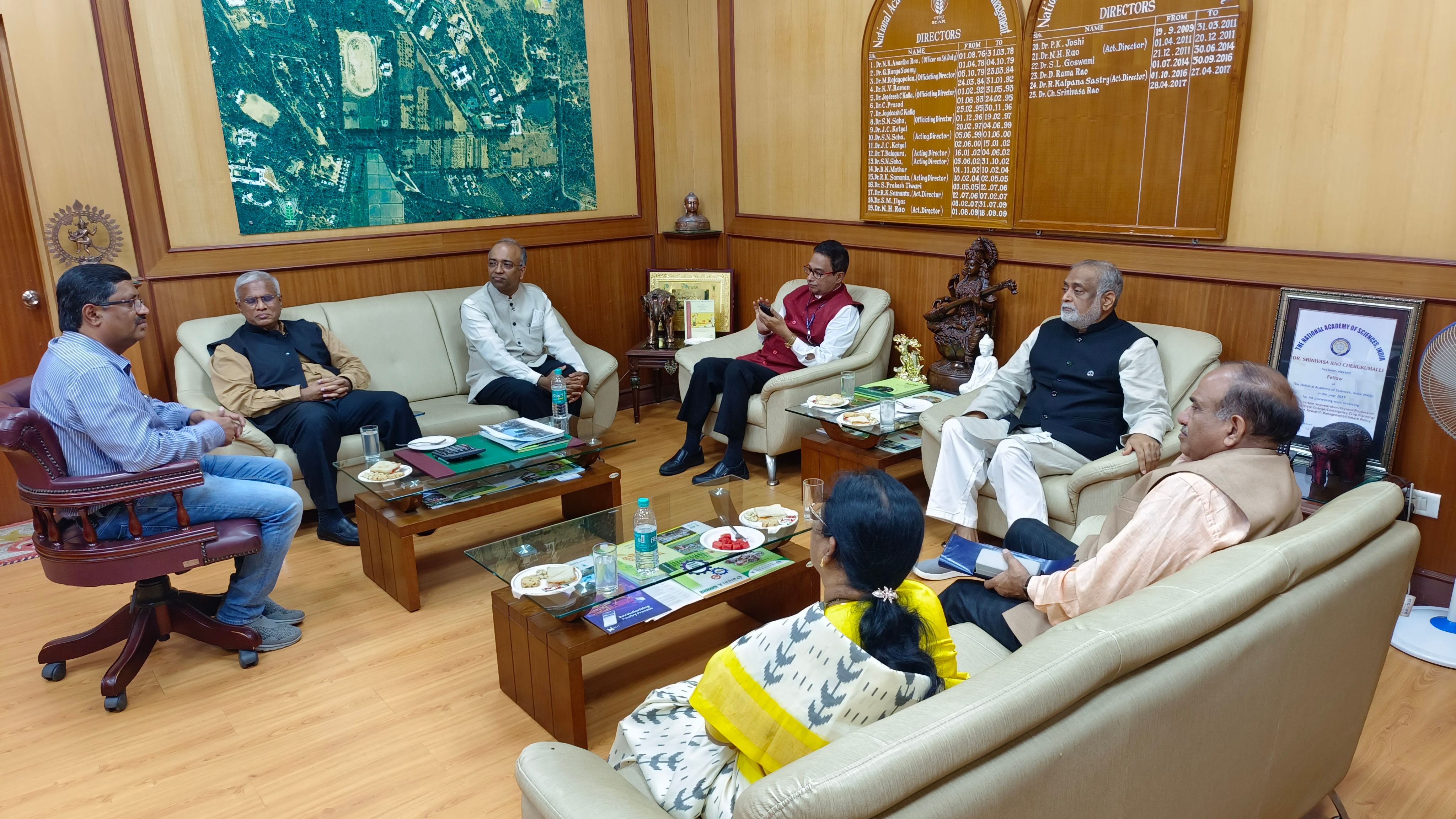 That evening at Kanha, between 5 and 6 p.m., Daaji spent time playing with his grandchildren. He succumbed to sadness upon seeing them and his daughter-in-law leave for the USA.

Daaji went for a walk at 6.20 p.m., attending to all the plants on the way. On seeing the leaves of one of the trees infected by bugs, he asked the concerned team to administer proper treatment to the tree. He also told them to lend proper support to a few plants, which were bending to one side due to the rains. 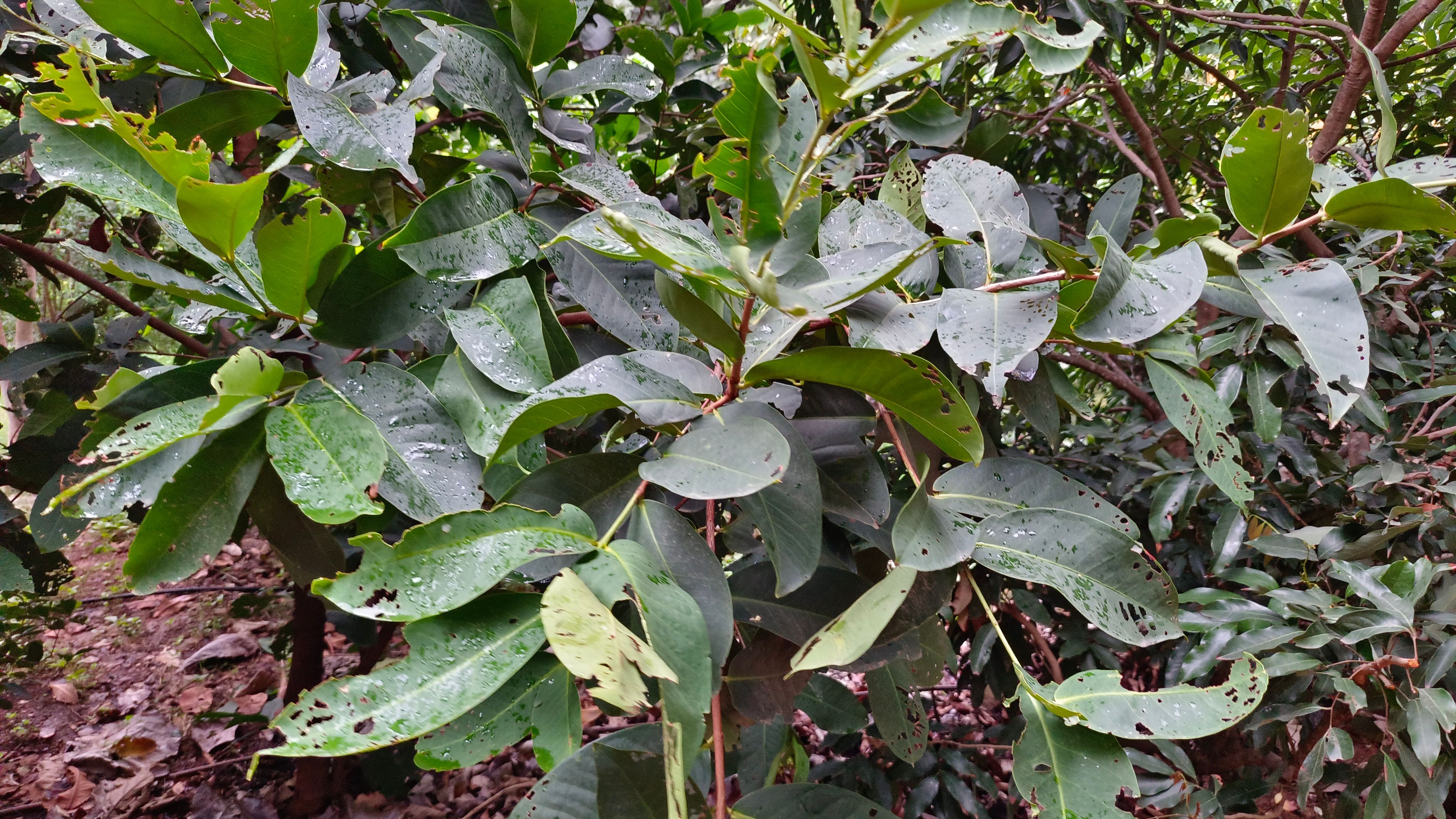 At 7 p.m. Daaji indulged in some breathing exercises with the help of the Yoga team at Kanha.