It’s a laidback morning. Daaji spent quite some time relaxing on the swing.

At around 10.45 a.m., Lalita Sreenivasan and Chinu Sreenivasan met Daaji to discuss the forthcoming session with preceptors on Sunday, 4 September 2022. They updated him on their call with regional facilitators regarding the new initiative on preparing preceptors to train other candidates for preceptor work. Daaji emphasized the need for regional facilitators to do their work perfectly, stating that “The trainers’ failure will be their failure.”

In reply to an e-mail, Daaji clarified some nuances regarding Transmission:

When one soul transmits, it may fail to resonate completely with the receiving soul. Complete resonance is possible eventually, as the strings of both hearts change qualitatively. The question remains, who can transmit?

All the Heartfulness trainers are capable of transmitting. The trainers are the conduits, allowing the flow of Transmission to be directed with purpose. The source is always ready to make such a flow available all the time, and that source is the Guide under the tradition of Sahaj Marg [Heartfulness].

This understanding will help us appreciate the words of dear Lalaji:
“What is that fourth state called? It is called srut – attention – in the physical plane, or in other words, something heard that has been spoken by someone; shabda – sound – in the higher plane, where the feelings of the heart are expressed; and ashabda – non-sound – in the Real plane, which is Yogic Transmission. But all these are names and names only.”

Intrinsically all the strings are similar. Had there not been the presence of other conditioning, other interfering vibrations, the strings would have emanated the same frequency from the first moment. The delay is in getting rid of the rust and dust from the strings of the heart.

The wise ones thus ensure to clean the interfering vibrations, finetune the strings, and then transmit the essence through the medium of the heart in a prayerful state.

At 11.30 a.m., Daaji had a session with the physiotherapist and then went to rest.

He had another round of physiotherapy at 5.30 p.m., and then took a walk in the rainforest surrounding his home. He scrutinized the health of the plants on the way.

Daaji conducted meditation from 7.50 to 8.10 p.m. for the group of family members who were present.

At 9.15 p.m., Daaji met Subhajit Mazumder, Director of Strategic Growth, Microsoft India, who is a new seeker from Bengaluru. Subhajit informed him that over 3,000 employees of Microsoft have been participating in and experiencing Heartfulness Meditation sessions. Daaji suggested they plan an exclusive meditation session followed by questions and answers with all of them.

Subhajit went on to ask a few questions. He mentioned how the world is slowly moving away from multitasking. Daaji shared his insights on this topic and also answered a few other questions. Here are a couple of snippets from the conversation:

To Multitask or Not?

If you want to justify your action, you have to put all your energy into it. Multitasking is like activating multiple apps on your phone: it drains your phone’s battery very quickly.

The real test of your spiritual growth is to share it with someone else. Once you are able to do that, you have given the real guru-dakshina [an offering of gratitude to your teacher]. 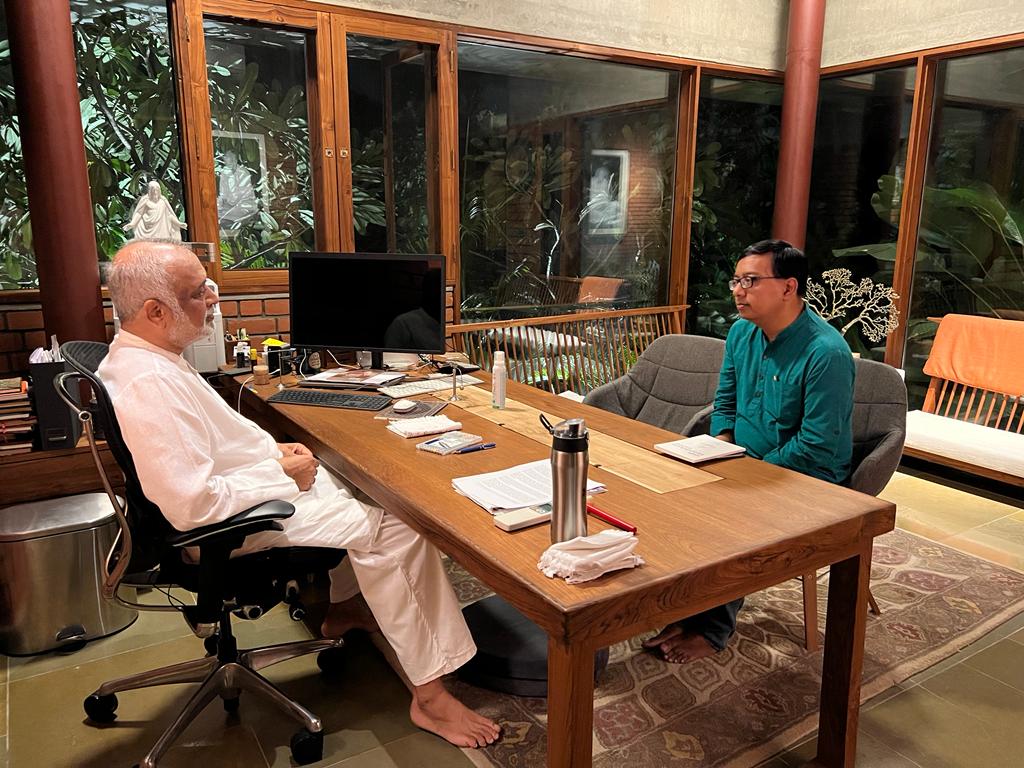