The art of perceiving with pure vision

“The spiritual path is always about uncovering layers after layers after layers. We form layers, or wrinkles, in our consciousness that have to be straightened up. Prejudices of all kinds, and conditioning, contribute to these fossil-like layers, which have to go in order to arrive at a pure vision. Otherwise, we remain with the colored glasses of our preconceived ideas, which spoil our vision.”

It is 8 a.m., and there is a flurry of activities at Daaji’s home in Kanha Shanti Vanam. Daaji is joined by a set of special guests, including Arvind Kumar, IAS – National Institute of Urban Management; Durga Jasraj, daughter of the late Indian vocalist, Pandit Jasraj; and Neeraj Jaitely.

Before breakfast, Daaji sat with his guests and spoke to them. Durga Jasraj shared memories of her late father, and his last mortal moments, with Daaji. This was followed by a discussion on the heart-melting performance by Pandit Hariprasad Chaurasia on the 24th of July in Kanha.

Daaji said, “The music played should be such that it puts you into silence, into the state of meditation. Otherwise, it becomes noise.”

He then shared the details of his Zoom call with Pandit Jasraj, which took place almost towards the maestro’s last days on earth. Daaji touched upon the need to conduct research on the relevance of singing a particular raga at a particular time and the corresponding neurological effect on the brain. He requested Durga to share the studies and suggestions made by the late Pandit in this field, so further research could be carried out accordingly.

Daaji referred to the musical notes used for activating the mid-brain in the Brighter Minds program. He said, “I think music has a far-reaching impact, which we don’t understand.” 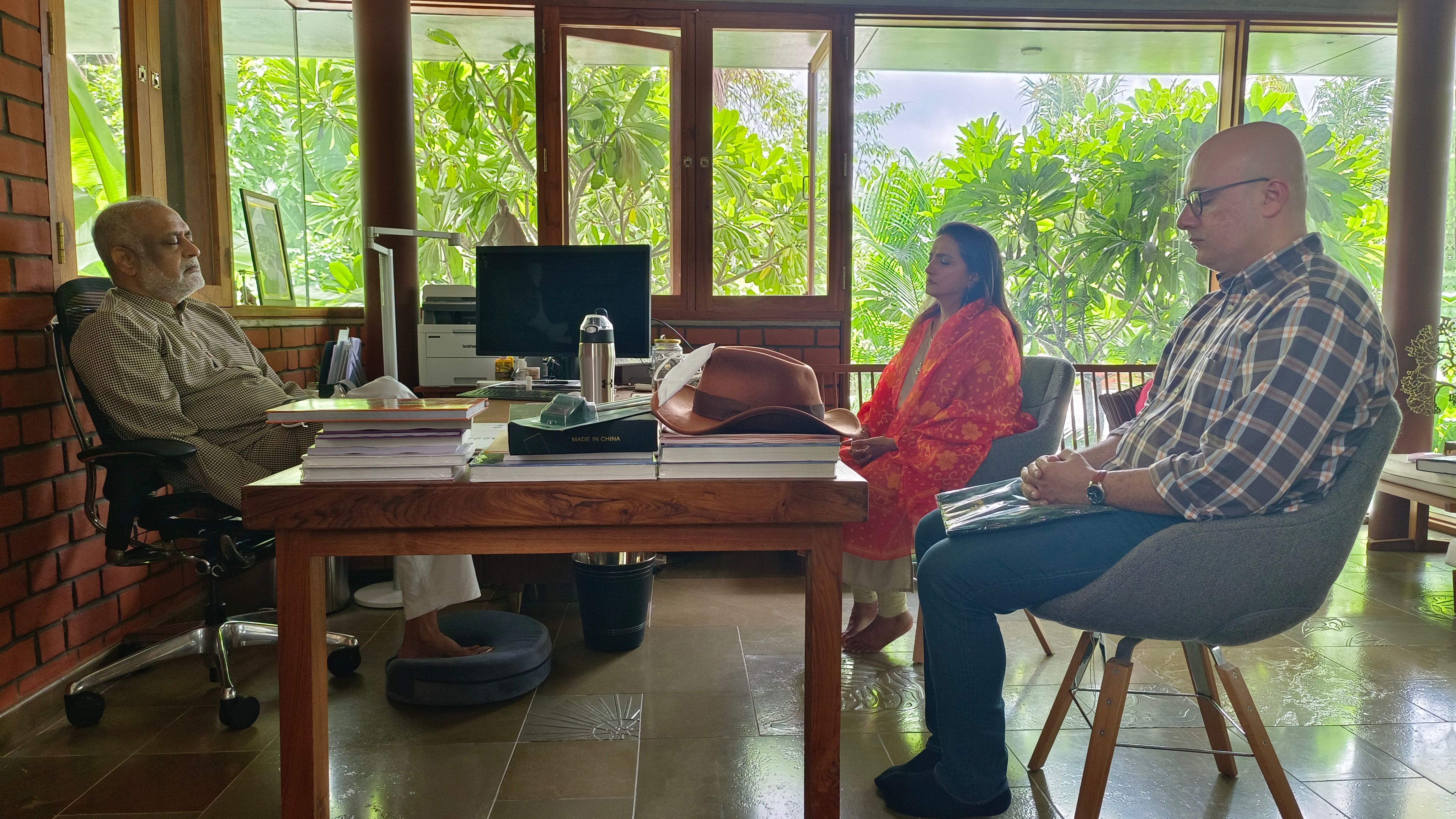 At around 8.25 a.m., the group gathered for breakfast, after which there was a demo of Brighter Minds by Kapil. He explained the concept and how it had helped him. After the presentation, the young lad took the time to clarify the doubts and answer the questions put forth by the wonderstruck audience. 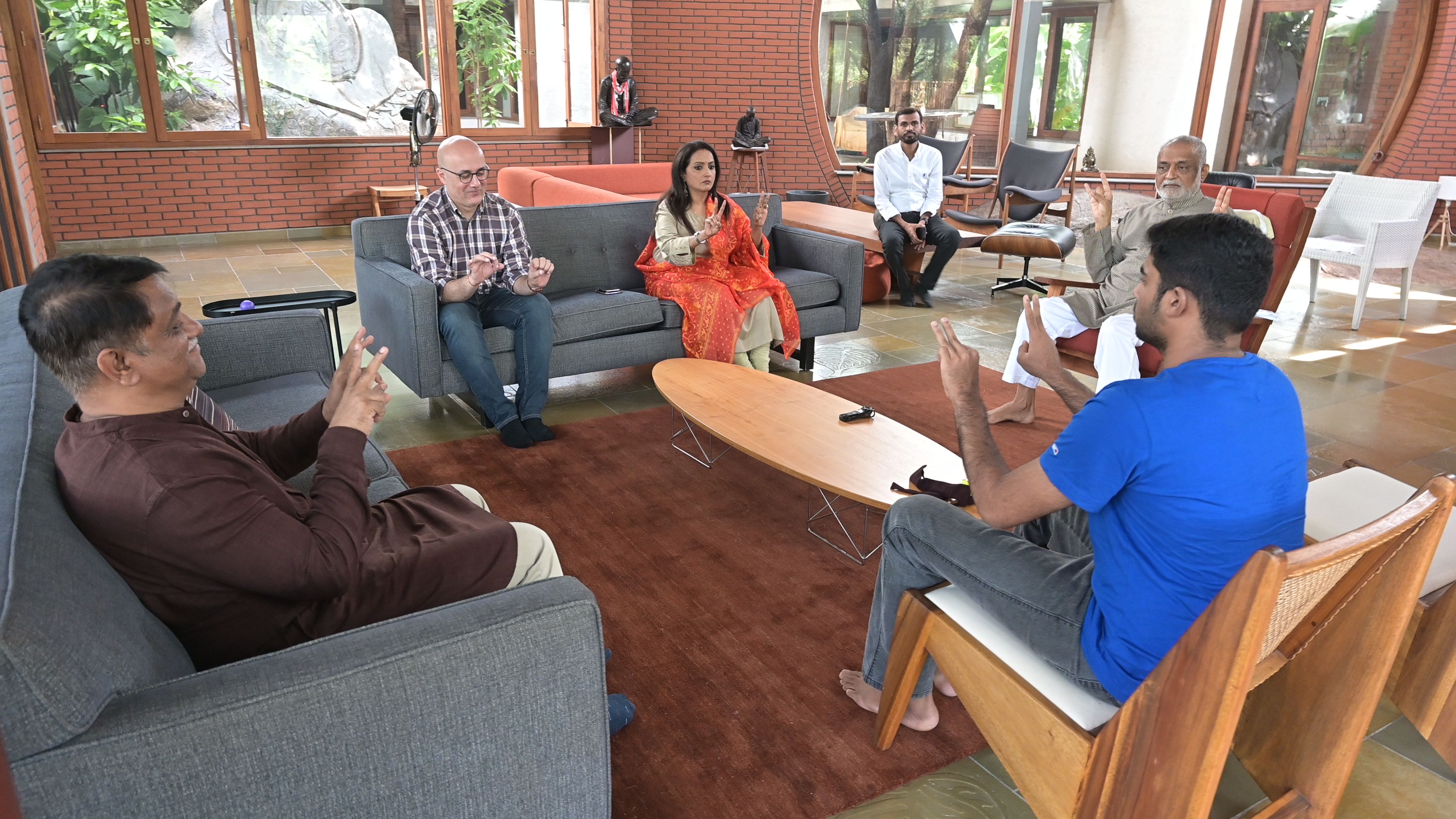 Durga Jasraj and Neeraj Jaitley were visiting Kanha to check out the prospects of holding a grand musical event on the campus in the near future. Daaji took them on a tour of Kanha and showed them the meditation hall as the proposed site for the event. The duo was spellbound to see the huge hall and the adjoining space constituting the conference room and auditorium. Daaji specifically drew their attention to the stone engravements of the Bhagavad Gita in the surroundings of the meditation hall.

From there the group proceeded towards the canteen. 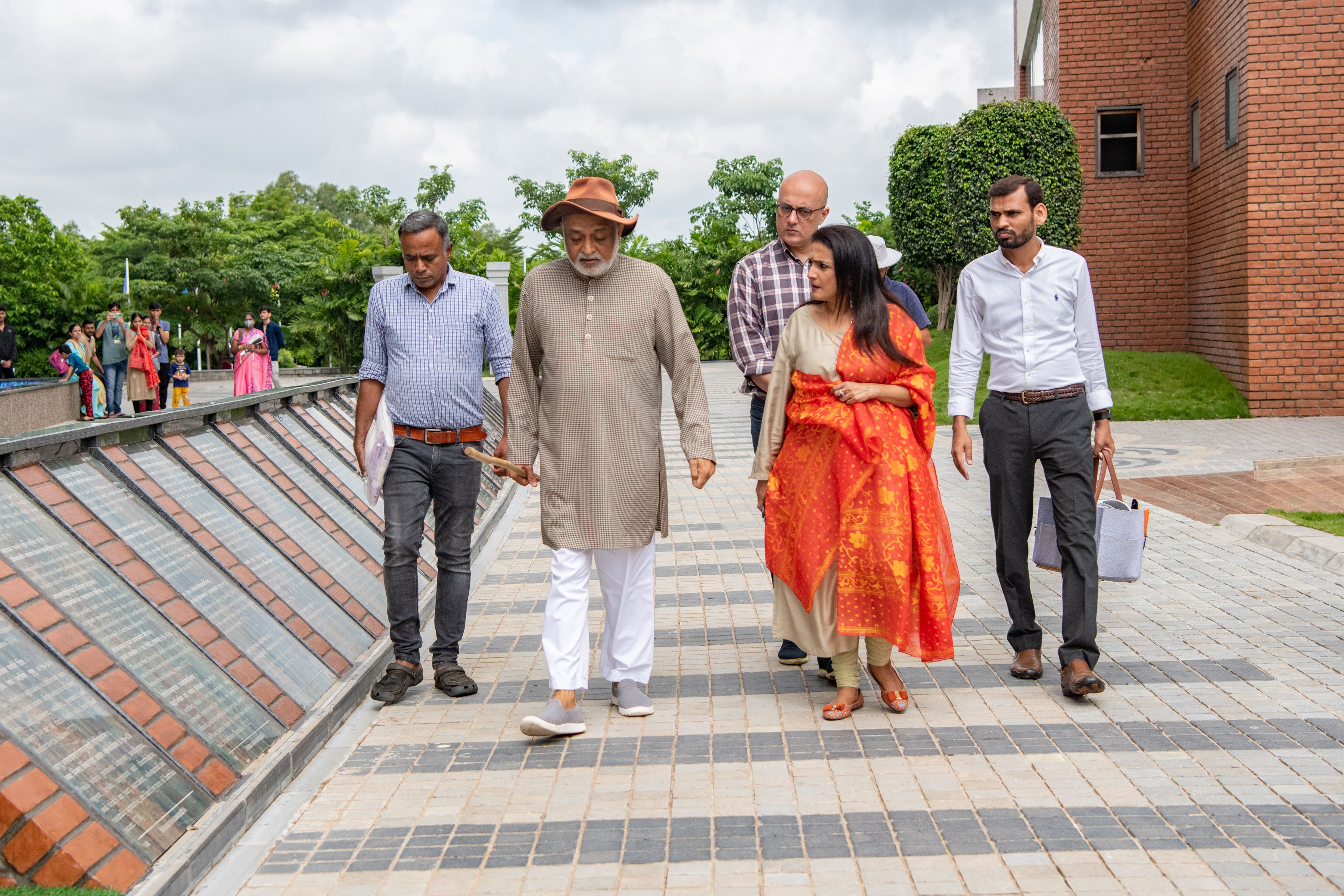 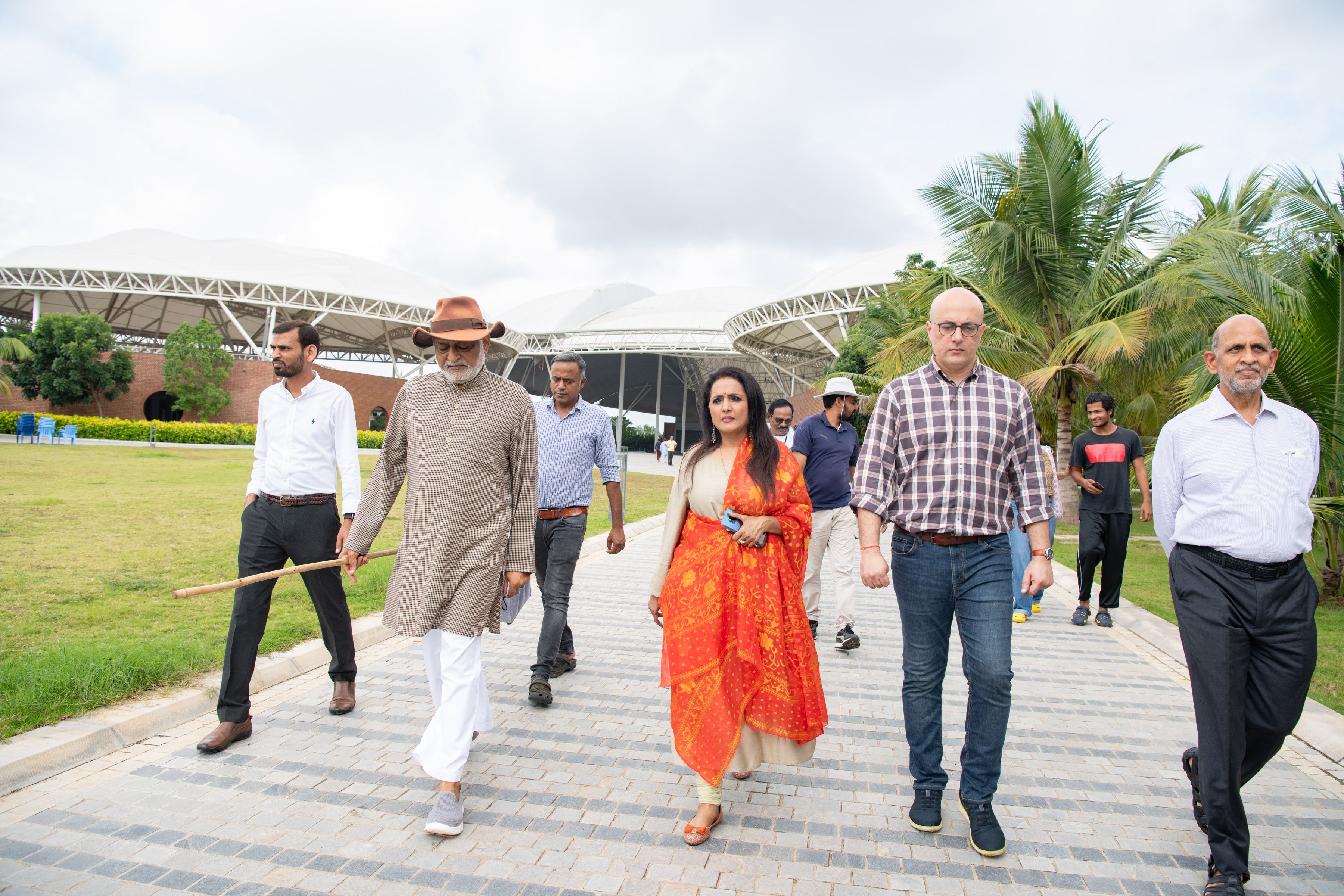 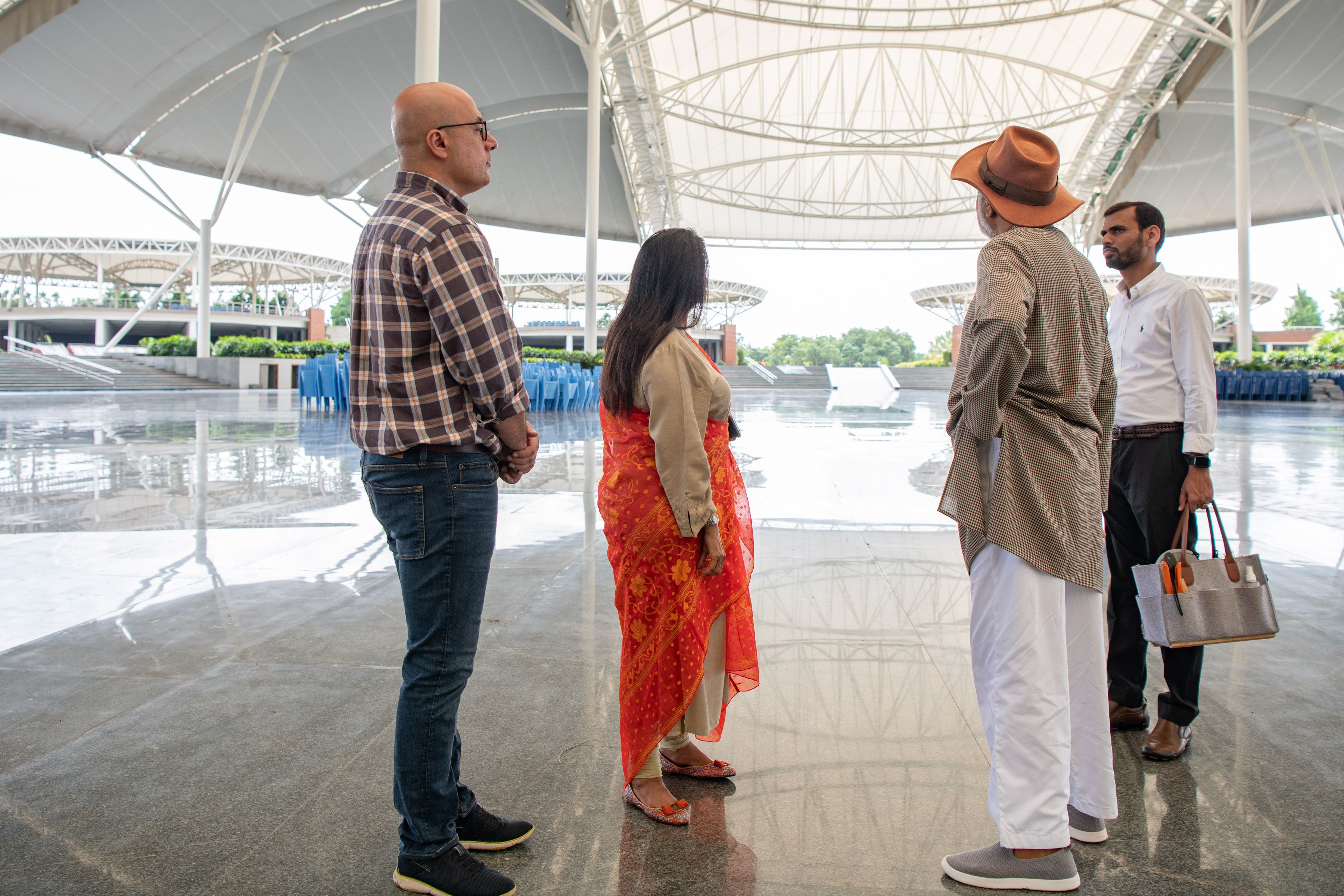 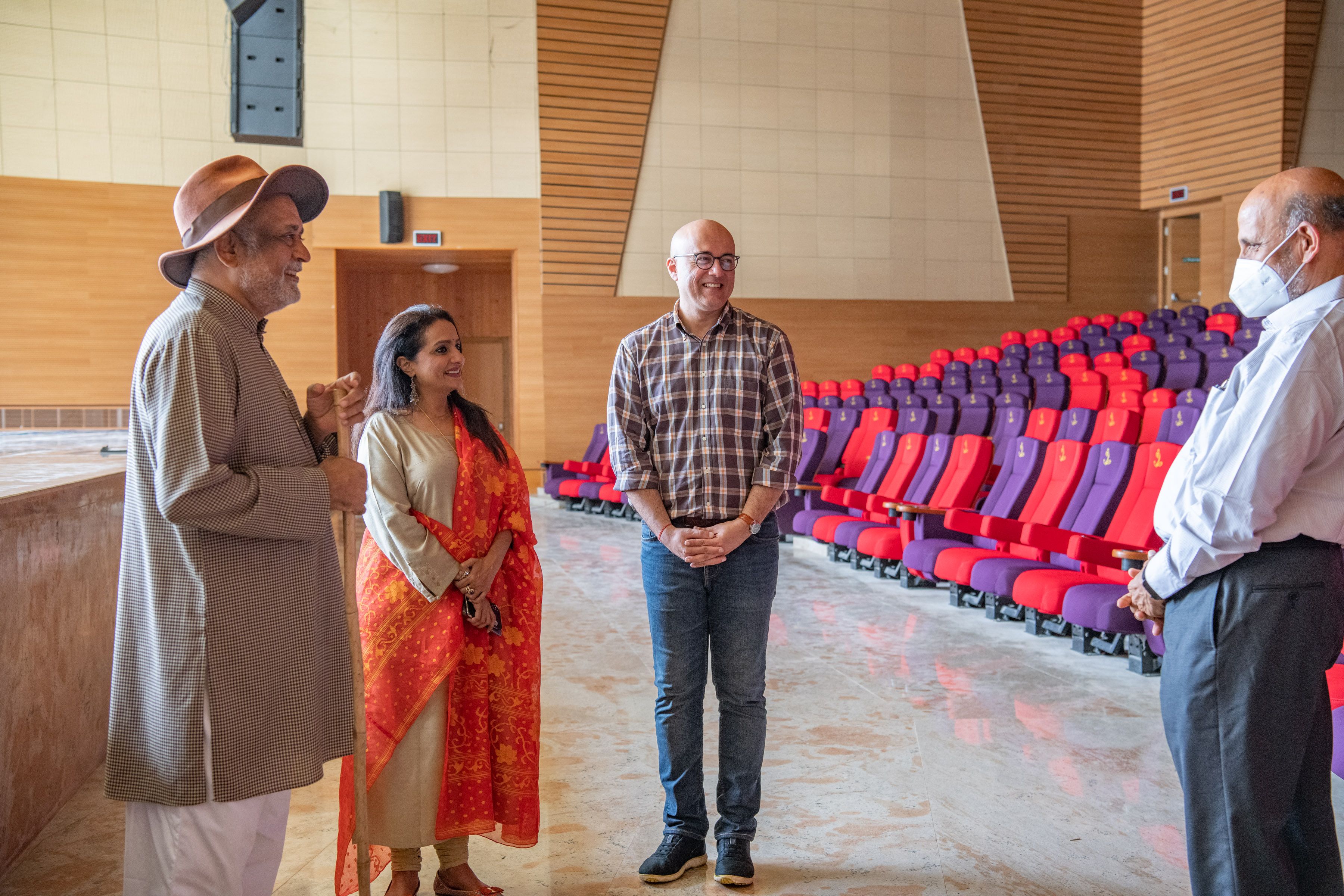 Near the canteen, Daaji was introduced to Shah Mohammad Saeed and six of his students, who had come all the way from Zakharda Primary School, Surat, Gujarat. Mohammad Saeed was a teacher and he had been instrumental in educating the children to rise above religious barriers and embrace the cultures of different communities. As a step toward this magnanimous endeavor, he had been assisting the students of the school to gain the wisdom of the Bhagavad Gita by learning the slokas.

Daaji took some time to witness an impressive presentation by the students of their talents and skills. He was deeply moved by their performance and the training imparted by their teacher. Saeed mentioned that they read the Bhagavad Gita every morning and every night, before going to sleep. The children had no homework other than learning the slokas, and this was the only book they would carry home.

When Daaji heard about the obstacle in their education due to their poor economic background, he immediately offered to take them into THLC after grade 5 and provide for their higher studies. Every soul witnessing and experiencing this moving episode was touched and delighted by Daaji’s assurance and his gift and opportunity of a lifetime to the students. 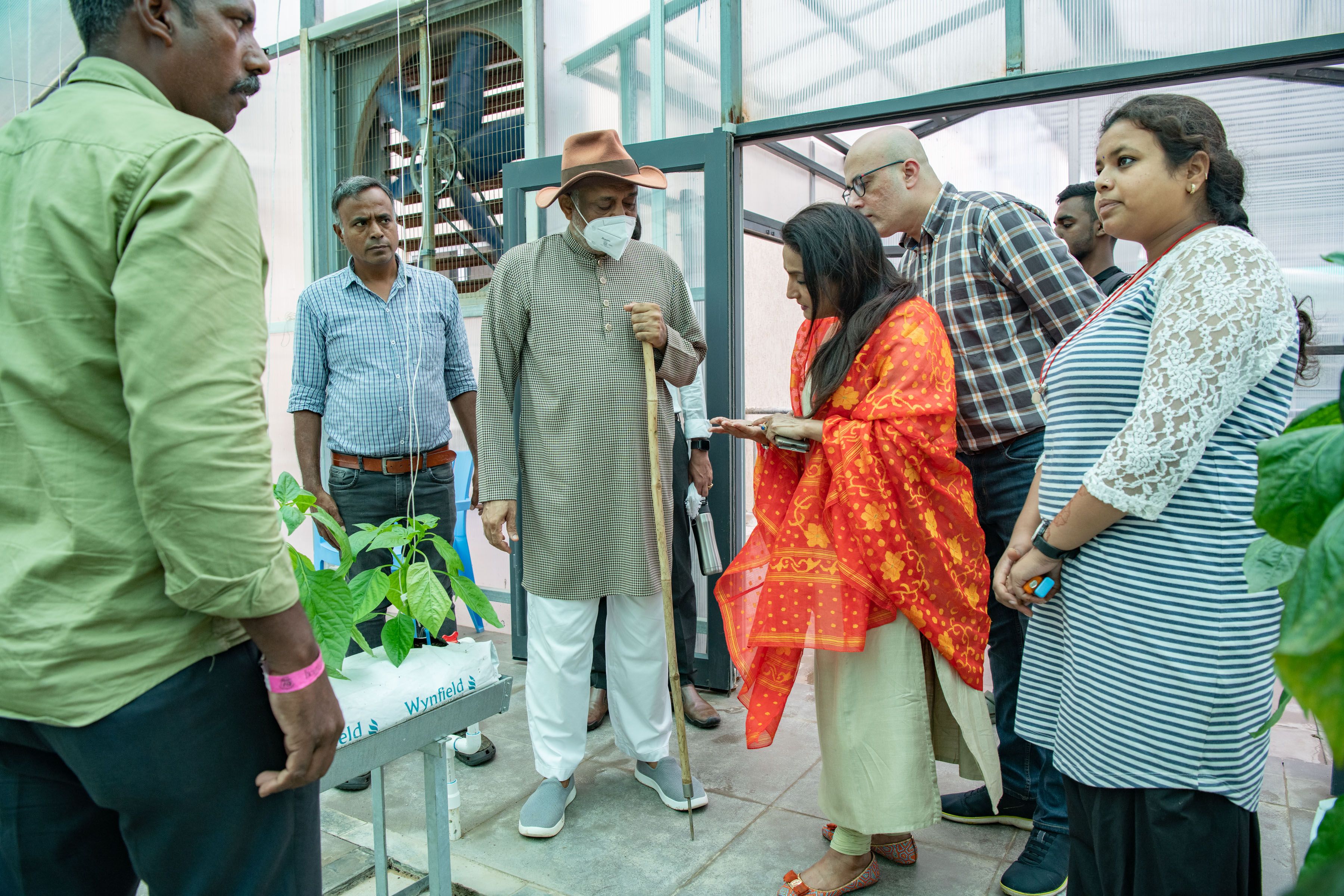 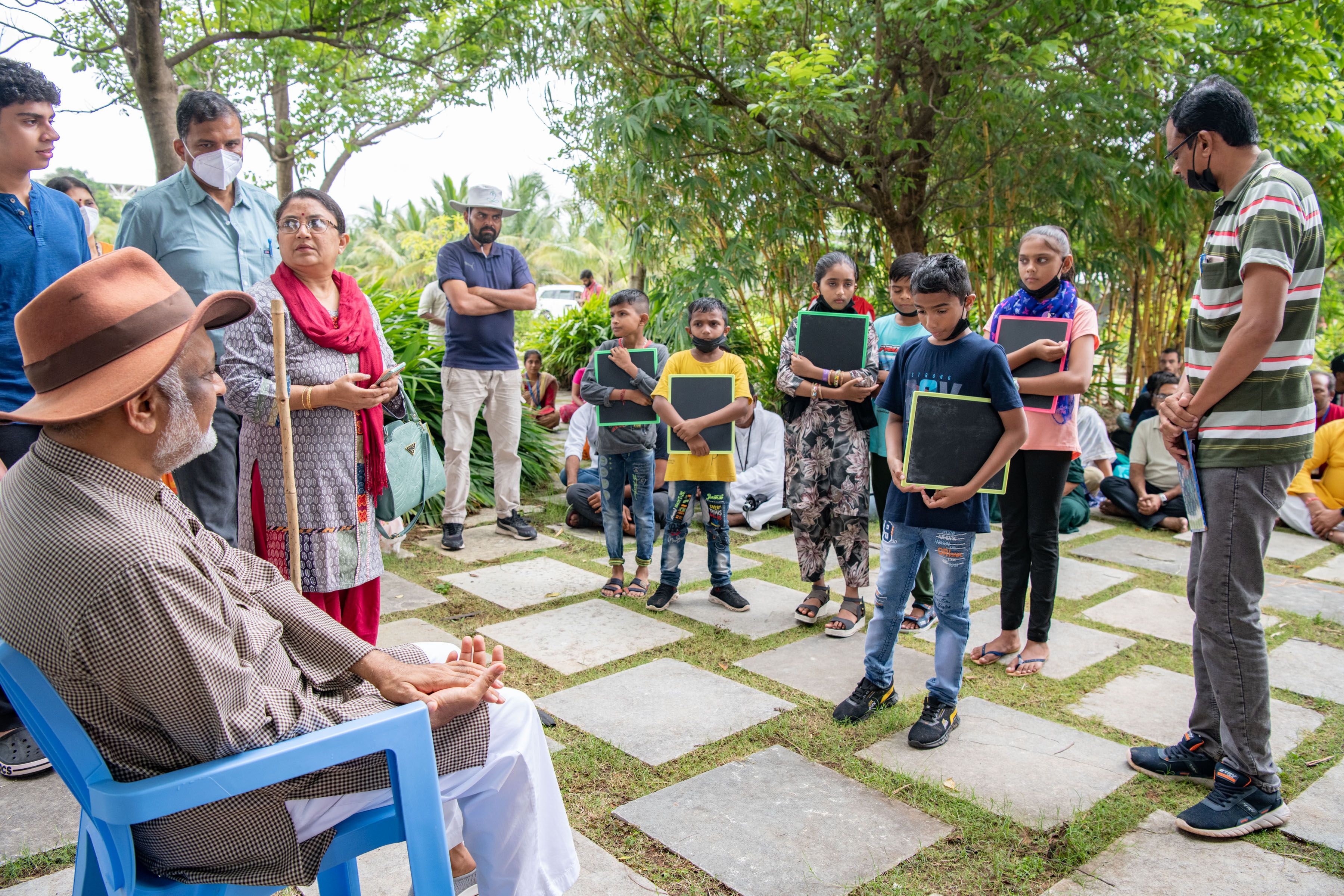 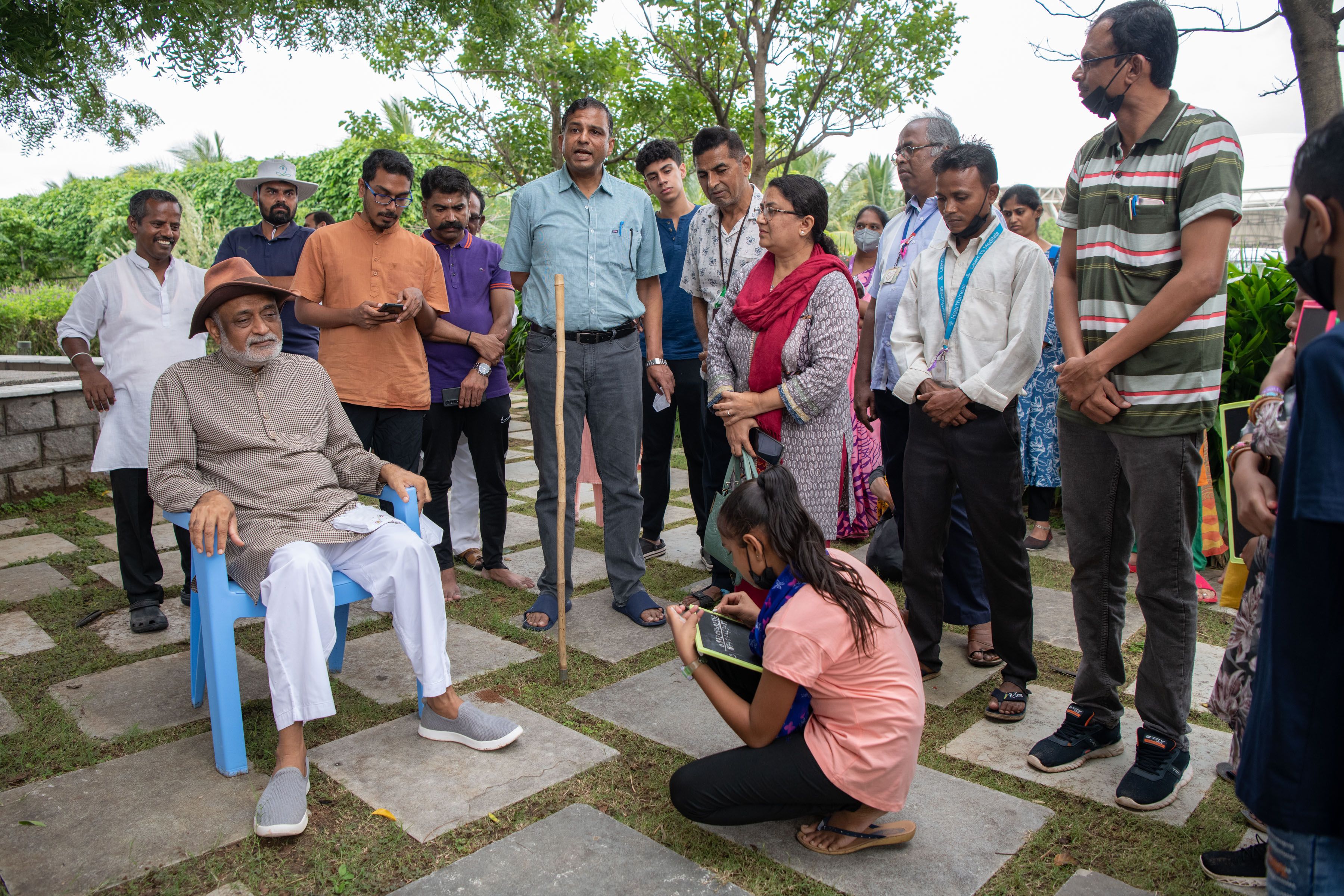 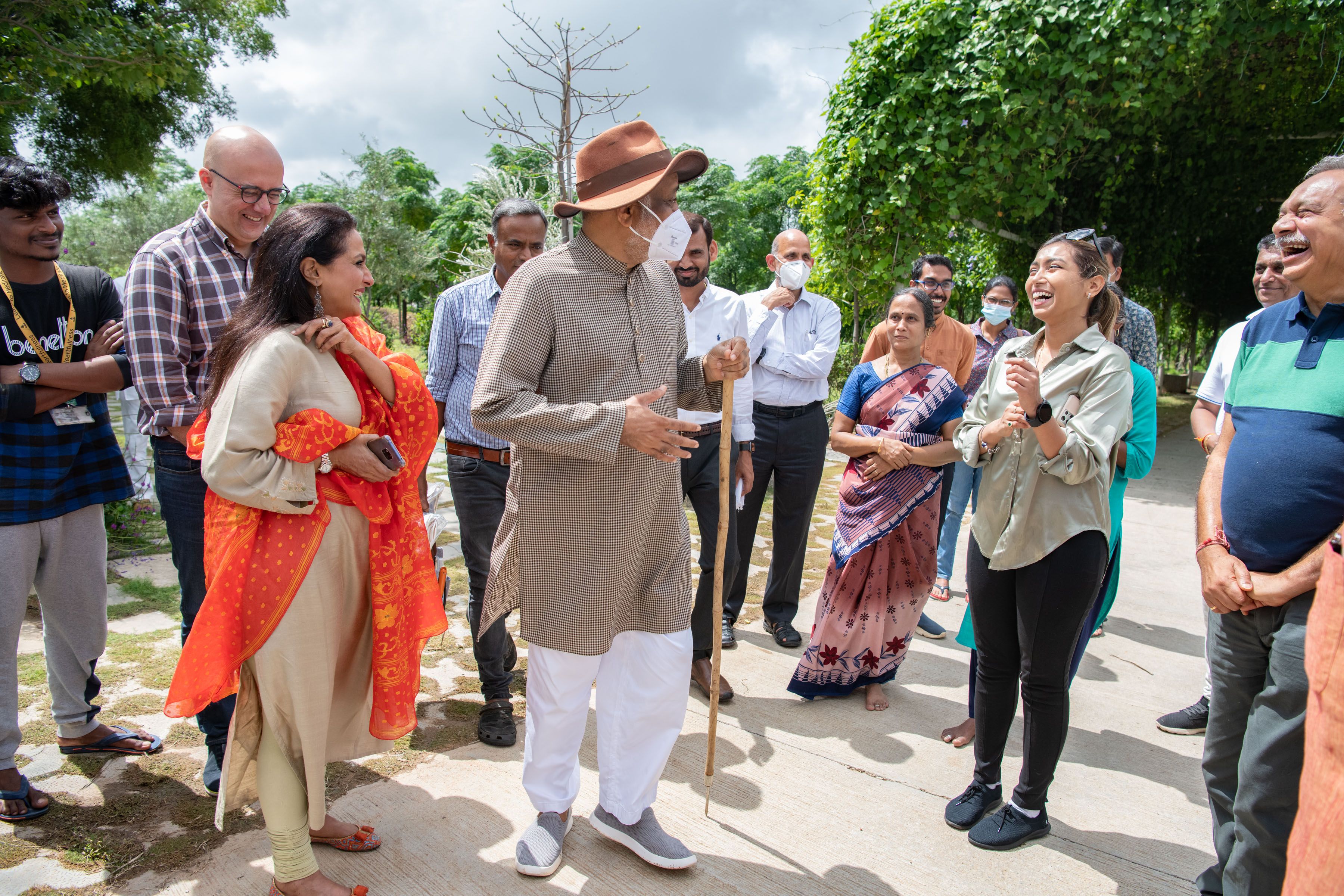 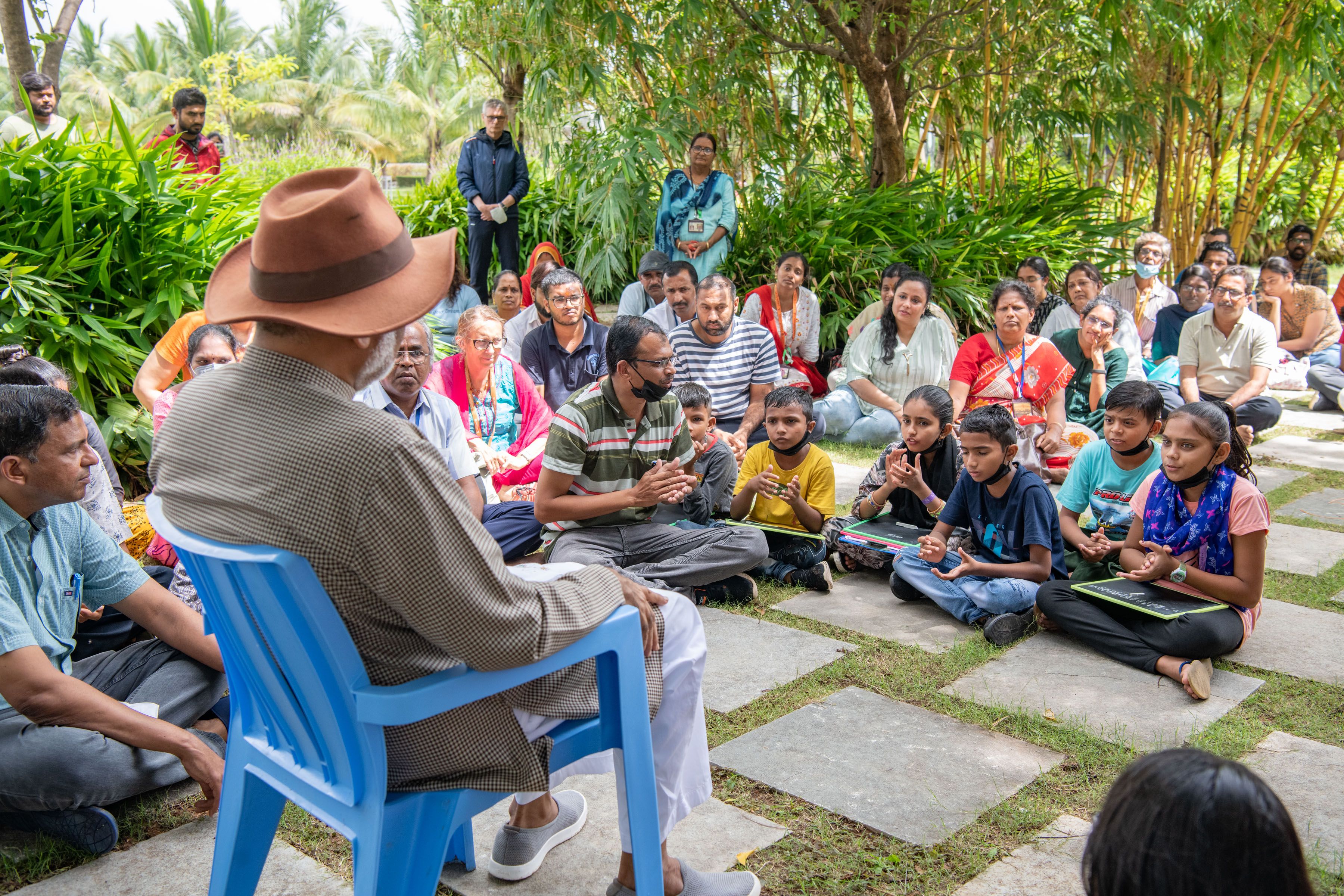 Daaji returned to assisting his guests on the continuing tour of Kanha. He showed them the neem trees near the Kanha Express and then proceeded towards the Madhuvanam pond. Daaji met Anneysa Ghosh Kumar, CEO of the Apollo Foundation, on the way. After visiting the wellness center and the hydroponics unit, the group returned home. 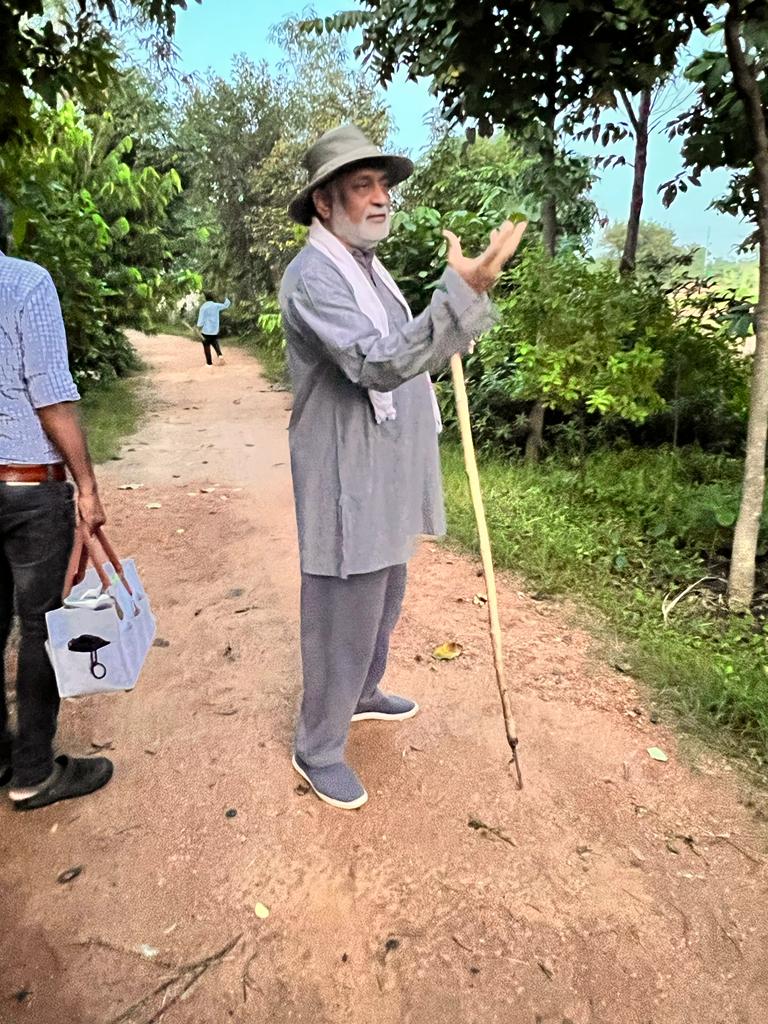 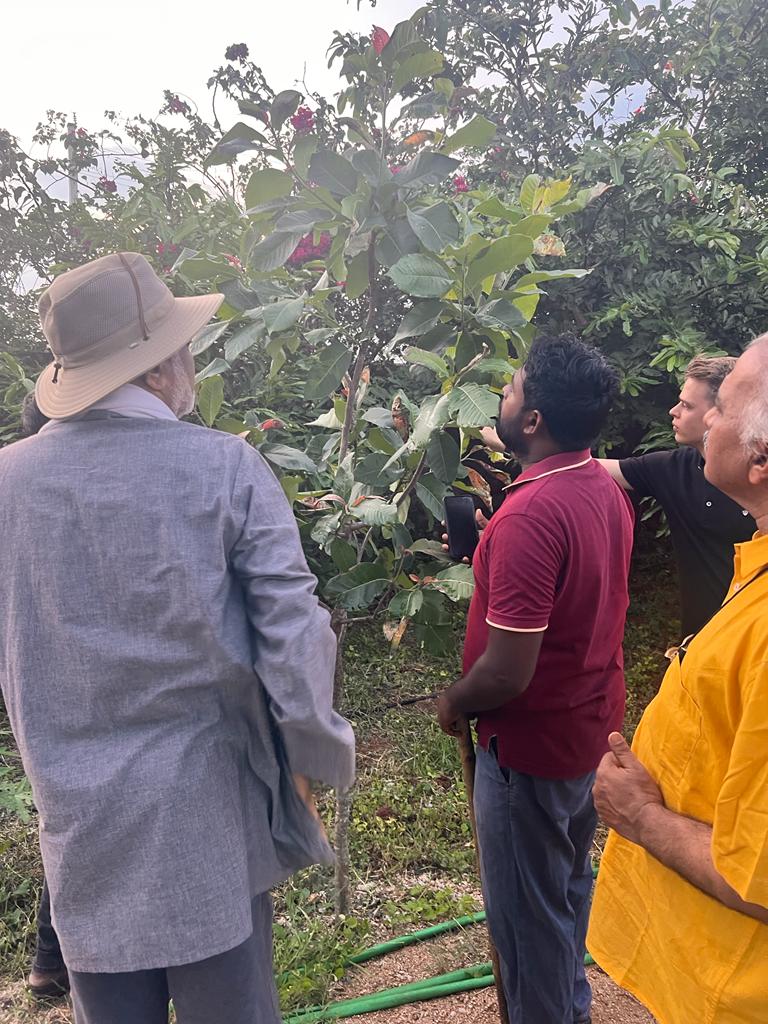 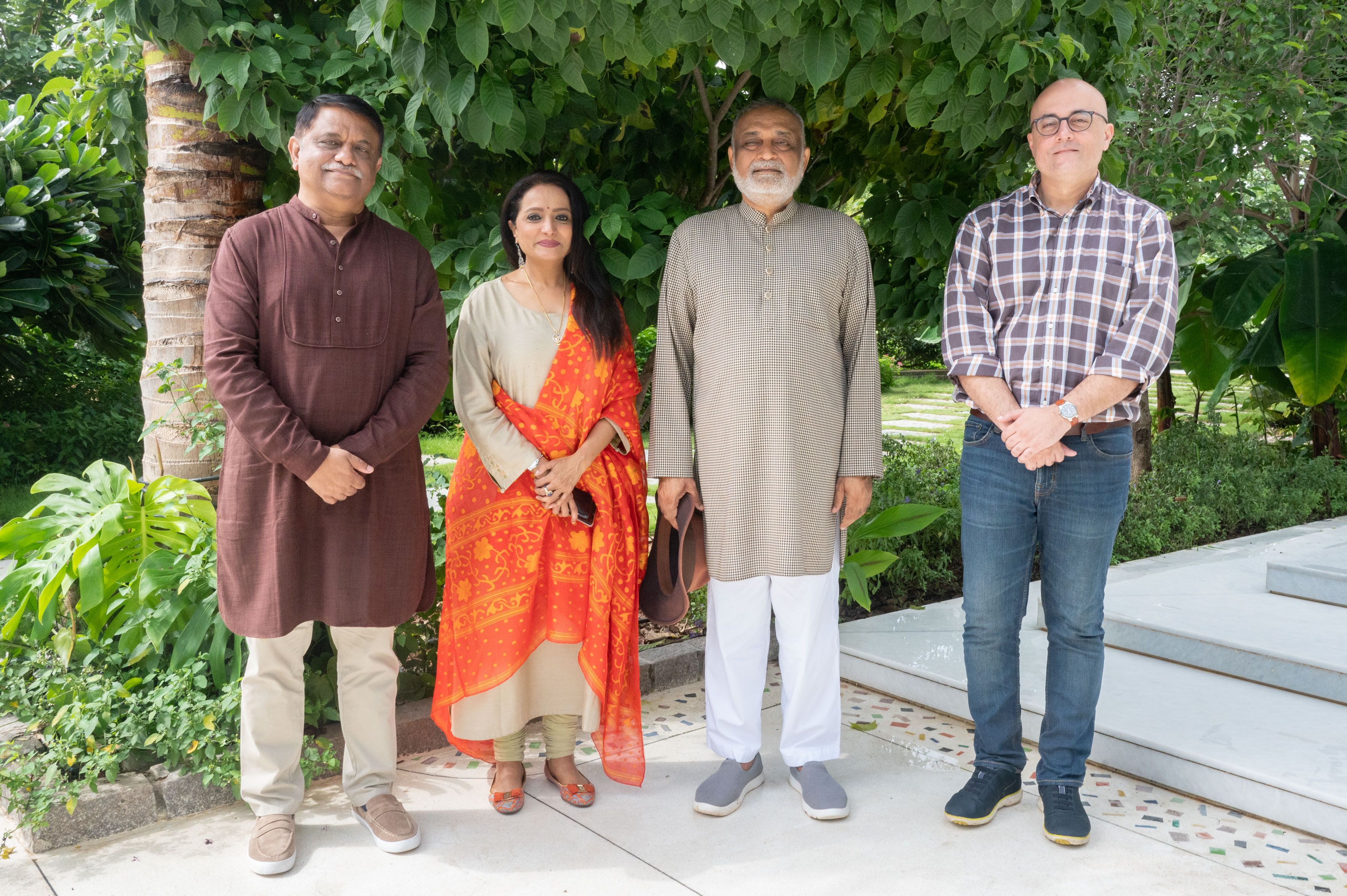 One of the many secrets behind Kanha’s greenery

In his office back home, Daaji chatted with his guests over coffee. Durga wanted to know how long it had taken for Kanha to come to its current shape.

Daaji explained, “Our first forest came up in 2017, followed by two or three more the next year. The trees in the avenues were planted parallelly. The neem garden beside the Kanha Express was developed three years back.

“Because of charcoal the plants and trees grow very fast. The beauty of using charcoal for plantations is that it holds all the nutrients at a particular level and doesn’t let them further down. We use the technique even in farming. The color of the leaves is lush green due to charcoal. Otherwise, the soil here is all rocky and has no nutrients.”

Daaji then walked his guests through the steps of meditation and conducted meditation from 11.20 a.m. to 11.45 a.m. After meditation Daaji commented, “It’s a really good revelation to be grateful to life itself. And it’s within us, not outside.”

As Durga shared her experience, Daaji explained how the practice of spirituality paves the way to pure consciousness.

The art of perceiving with pure vision

“The spiritual path is always about uncovering layers after layers after layers. We form layers, or wrinkles, in our consciousness that have to be straightened up. Prejudices of all kinds, and conditioning, contribute to these fossil-like layers, which have to go in order to arrive at a pure vision. Otherwise, we remain with the colored glasses of our preconceived ideas, which spoil our vision.”

Daaji guided his guests to take the next couple of introductory sittings from Sanjay Bhatia in Mumbai. At around 12.05 p.m., Daaji accompanied them to the main gate and gave them a warm send-off. 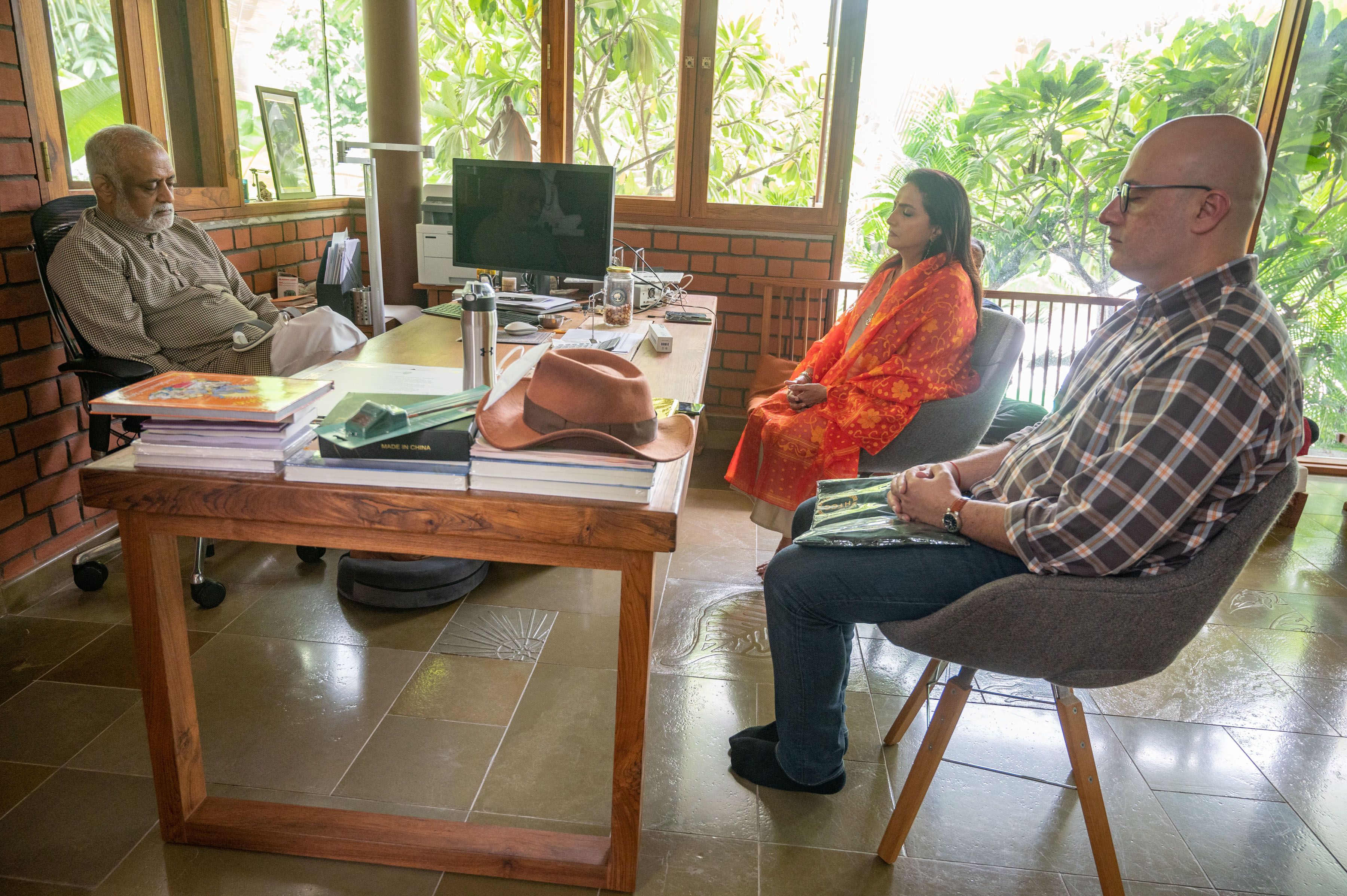 Afterward, while sitting on the swing, Daaji closed his eyes and went into meditation. It appeared as if he was in communion with Babuji.

At around 1 p.m., he had lunch and rested for a while. Again, in the evening, he took a walk in the company of his beloved plants.

After dinner, Daaji met a few seekers from Thailand, the USA and other places in his office. Shalini Joshi Yamdagni gifted Daaji her book titled, Instant Pain Relief.

Shalini is an international expert in pain relief, and she practices an Emotional Freedom Technique (EFT) of tapping pressure points to heal chronic pain. Daaji shared with her the details of his shoulder pain, which has been bothering him for almost ten years now.

Later, Shalini asked Daaji to let her demonstrate the tapping point technique for his shoulder pain, to which he promptly agreed. He suggested that Shalini plan a training session on this modality of healing in Kanha.

The day came to a close with Daaji retiring for the night. 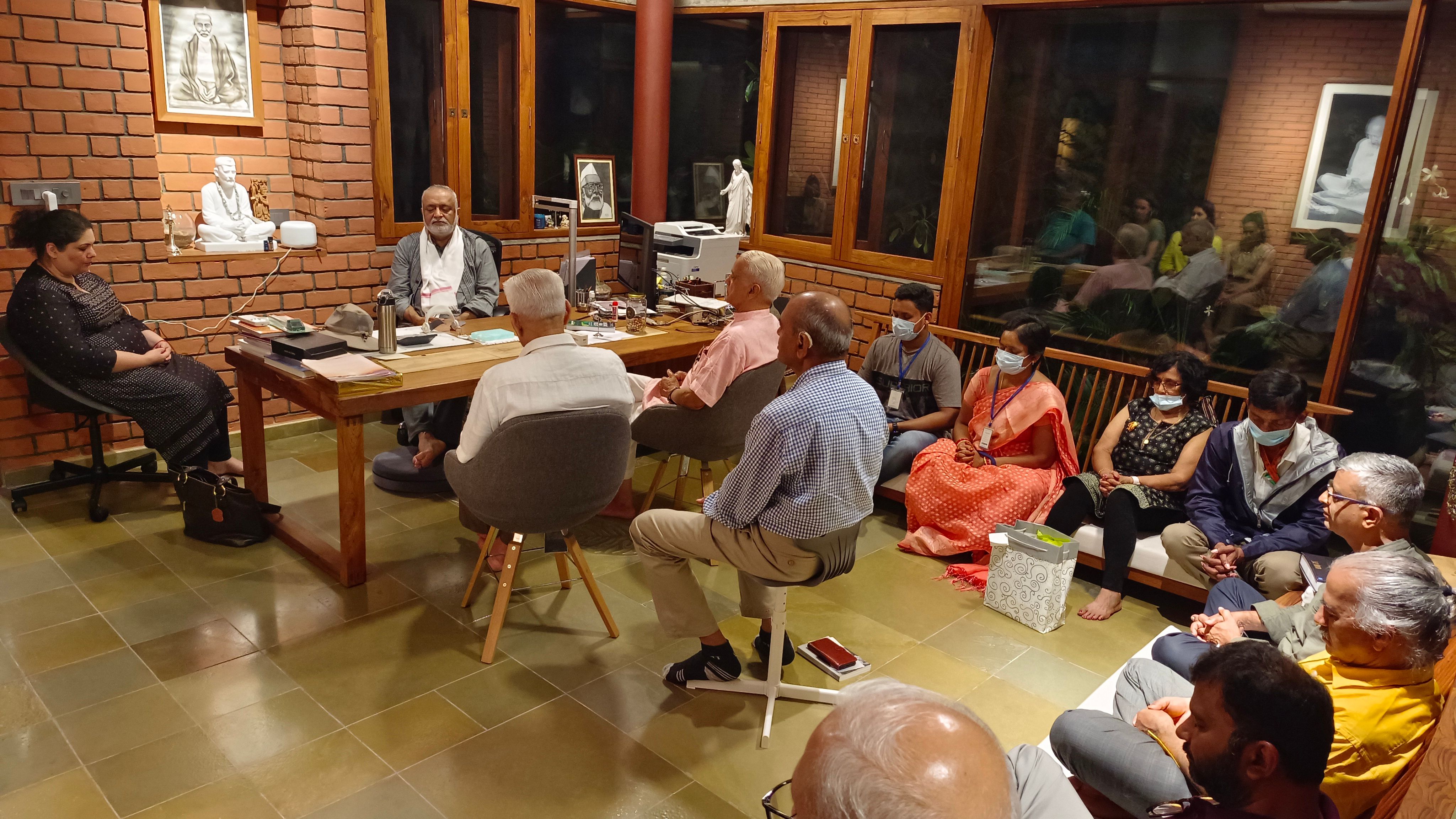