The Greater Souls in Higher Dimensions

There [referring to the higher dimensions], time does not exist. So even when you talk about a moment, they might have already done what we are able to see now.

The activities of the day began at 8.45 a.m. with Daaji meeting Pravin Dagdee, the school correspondent, and Bhavna Sonkamble, the principal of THLC. They discussed many aspects of the school administration and how to take them forward. Daaji expressed his keen intention to take the school to the top level. 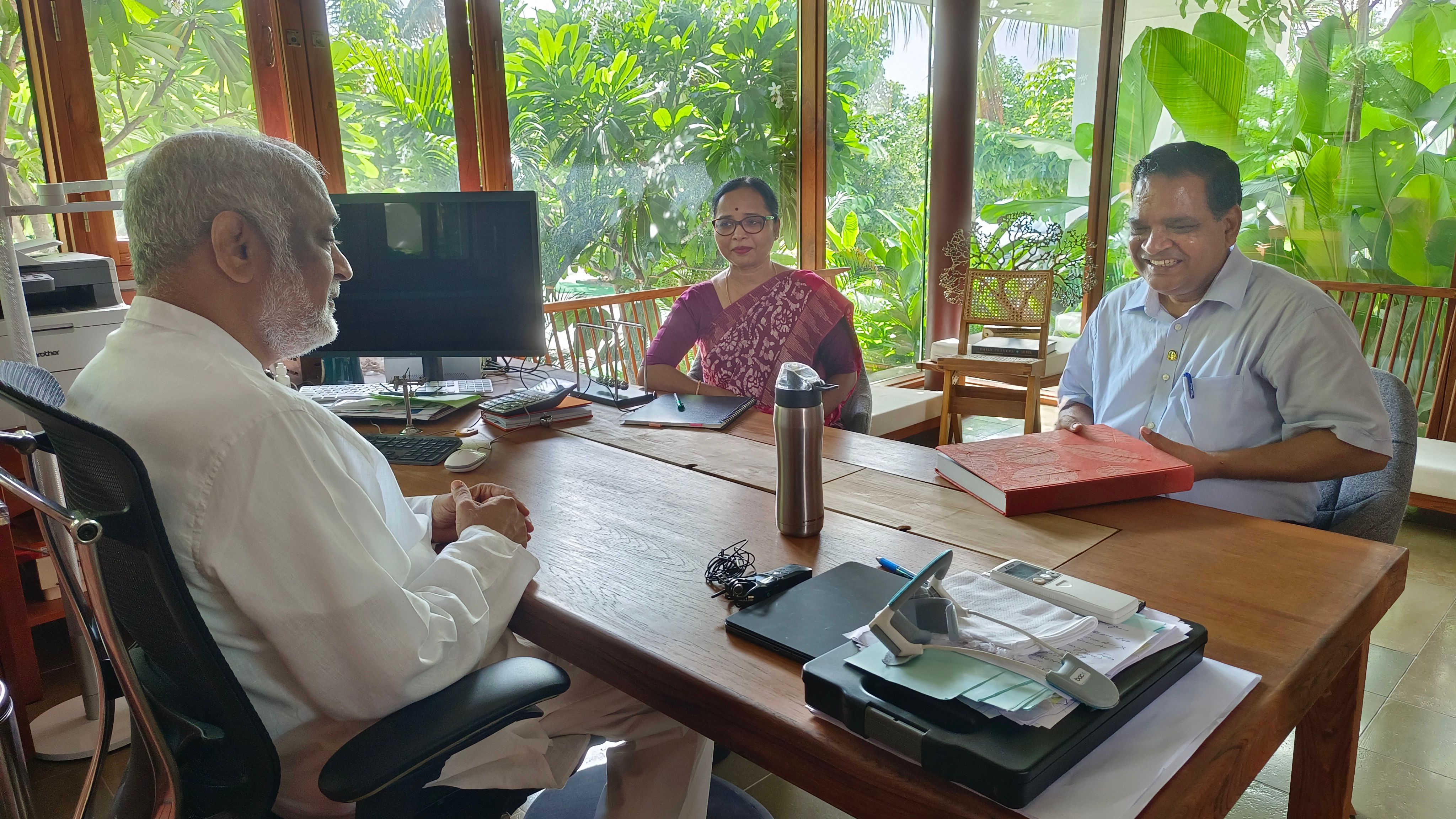 At 9.30 a.m., Chaitanyaji and Nirmalanandaji from the Yogoda Satsanga Society of India met Daaji. They have been planning to organize their event in February in Kanha. Daaji went on to express his concern regarding the exploitation of innocent people at the hands of pseudo gurus and monks. He then asked if they could all meditate for a few minutes, to which Chaitanyaji and Nirmalanandaji happily agreed.

Daaji conducted meditation for about 20 minutes. It was a very deep and profound session. After meditation, Daaji called both the guests near his computer and showed them the pictures of Babuji, Chariji, Anandamayi Ma, St Therese of Lisieux, Shri Ramakrishna Paramahamsa, Swami Vivekananda, Janaki Ma, and many others. He informed that all those pictures belonged to the Guides of the Heartfulness/Sahaj Marg lineage.

Specifically pointing to one of the pictures, Daaji said, “You know him well.” Both Chaitanyaji and Nirmalanandaji immediately smiled. Their faces lit up with joy upon seeing Yoganandaji’s picture among the Guides of Heartfulness.

Daaji told them, “So to us you are no strangers. I felt the enormous thundering presence of Yoganandaji in today’s meditation. I could feel his vibrations, his blessings. It’s a very good beginning. It’s not a coincidence.” He went on to clarify that he was not making it all up, and the fact that Yoganandaji was a Guide of the Heartfulness lineage was kept a secret until now.

“There [referring to the higher dimensions], time does not exist. So even when you talk about a moment, they might have already done what we are able to see now.” 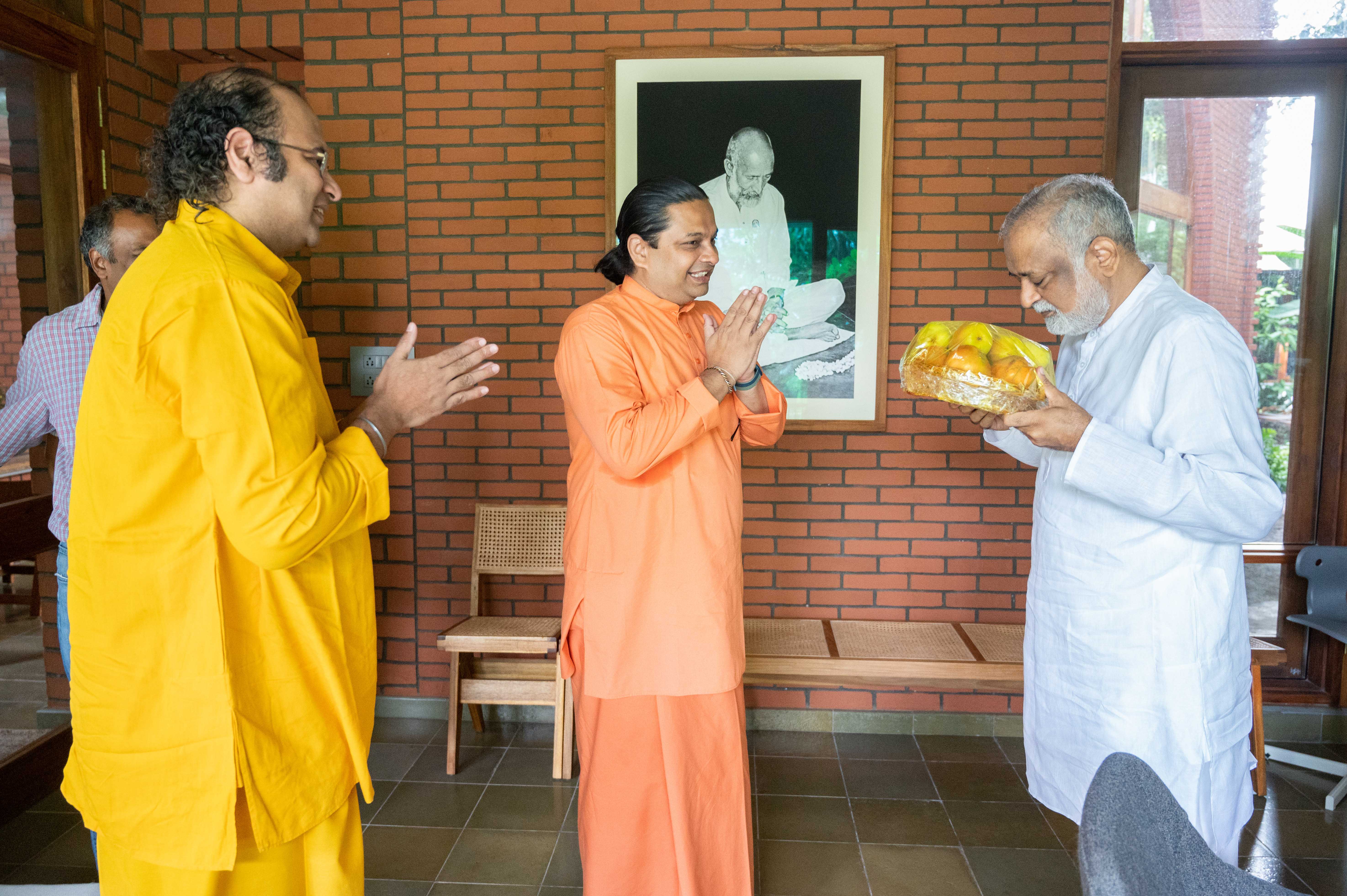 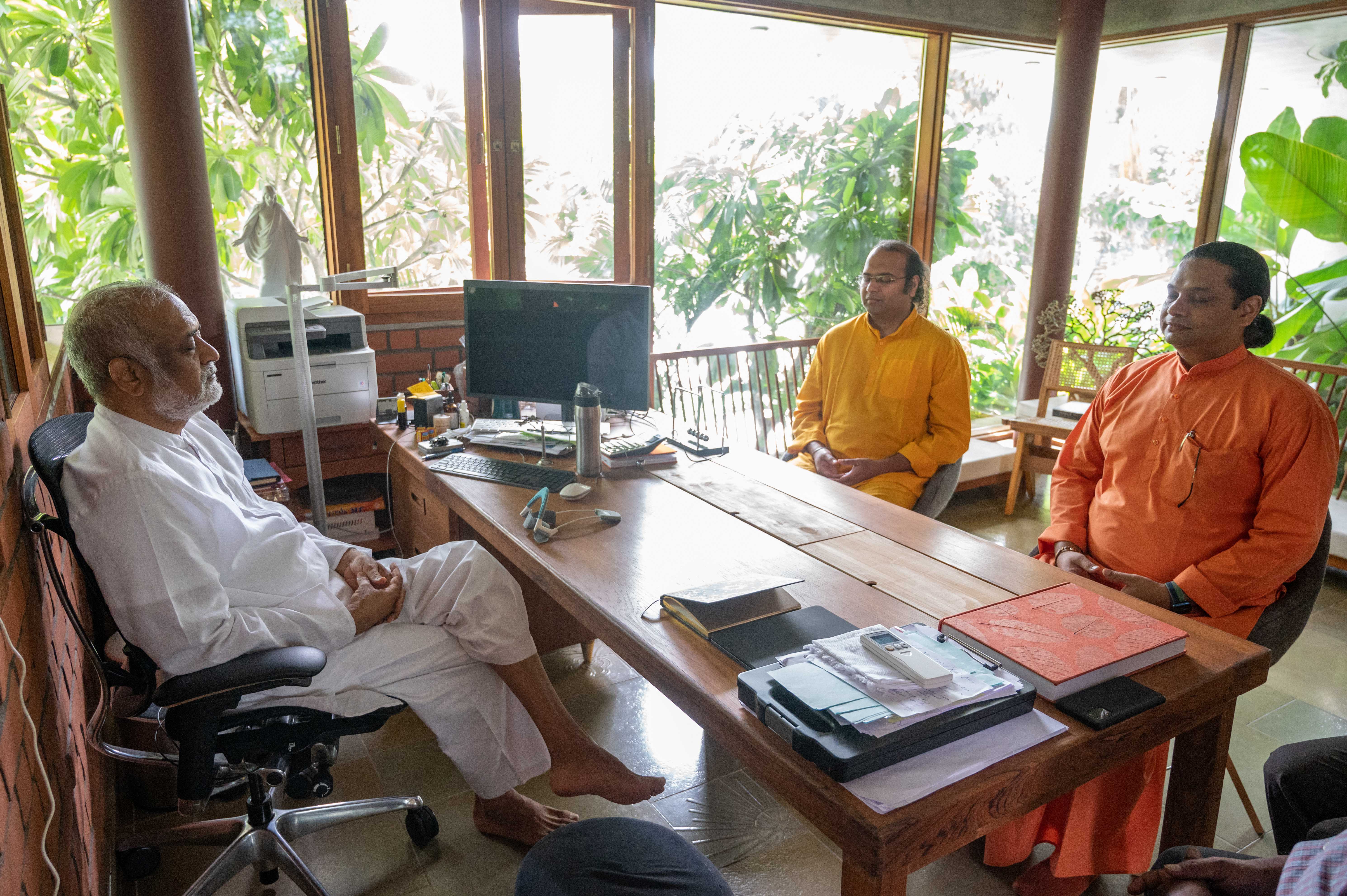 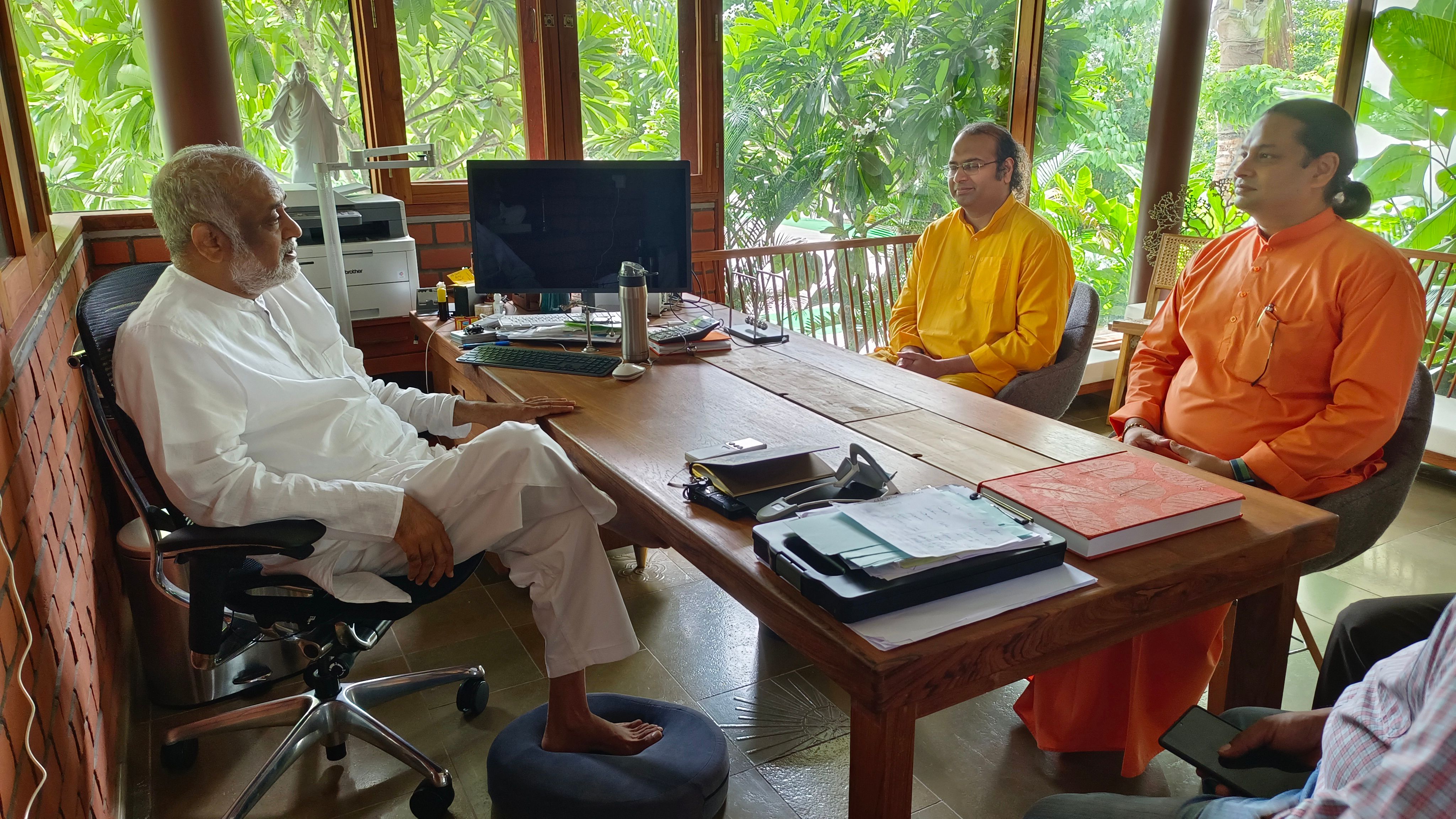 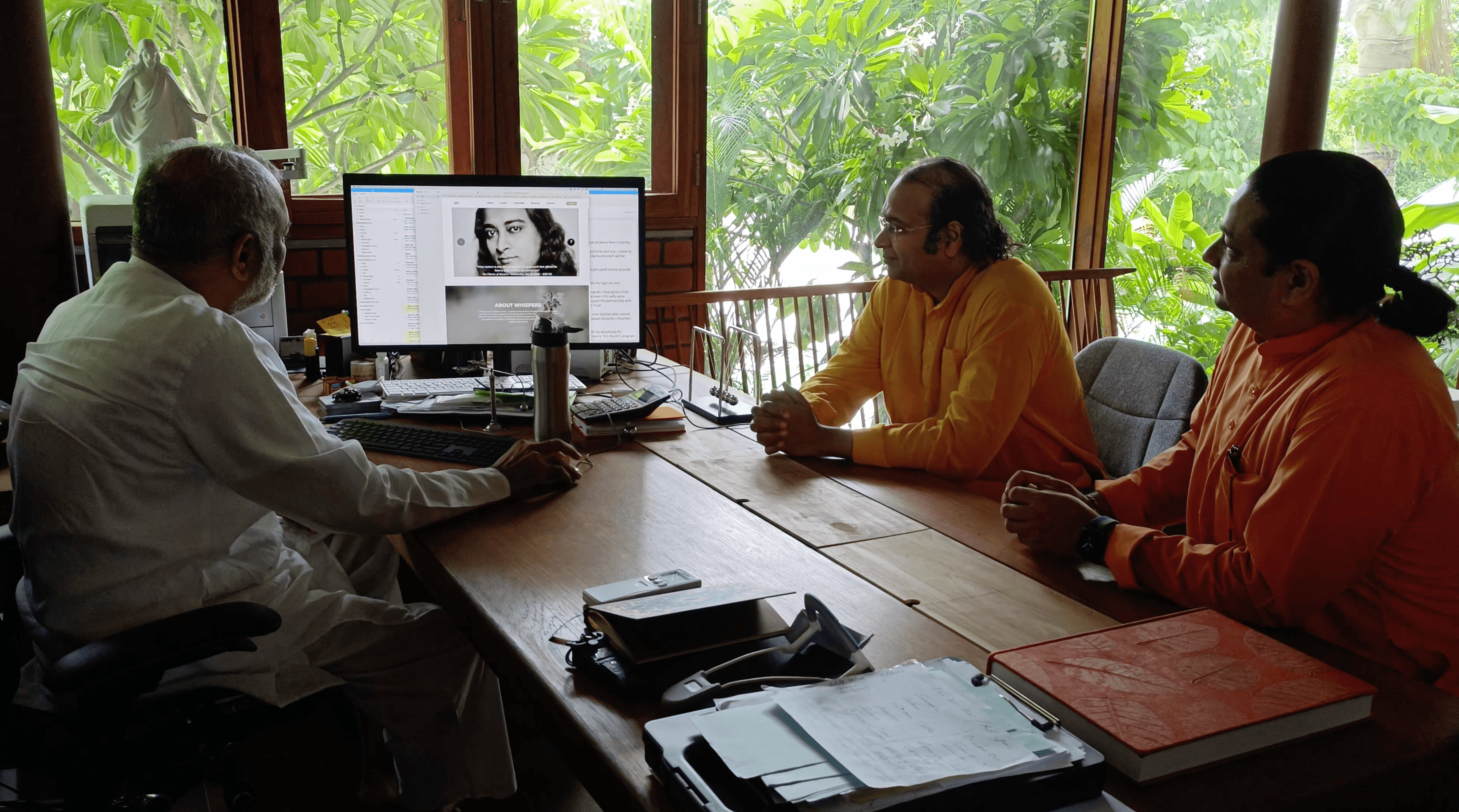 Later Daaji’s grandchildren came to play along with Joshua Pollock’s kids. After spending some time with the little ones, Daaji went to attend to his shoulder pain. 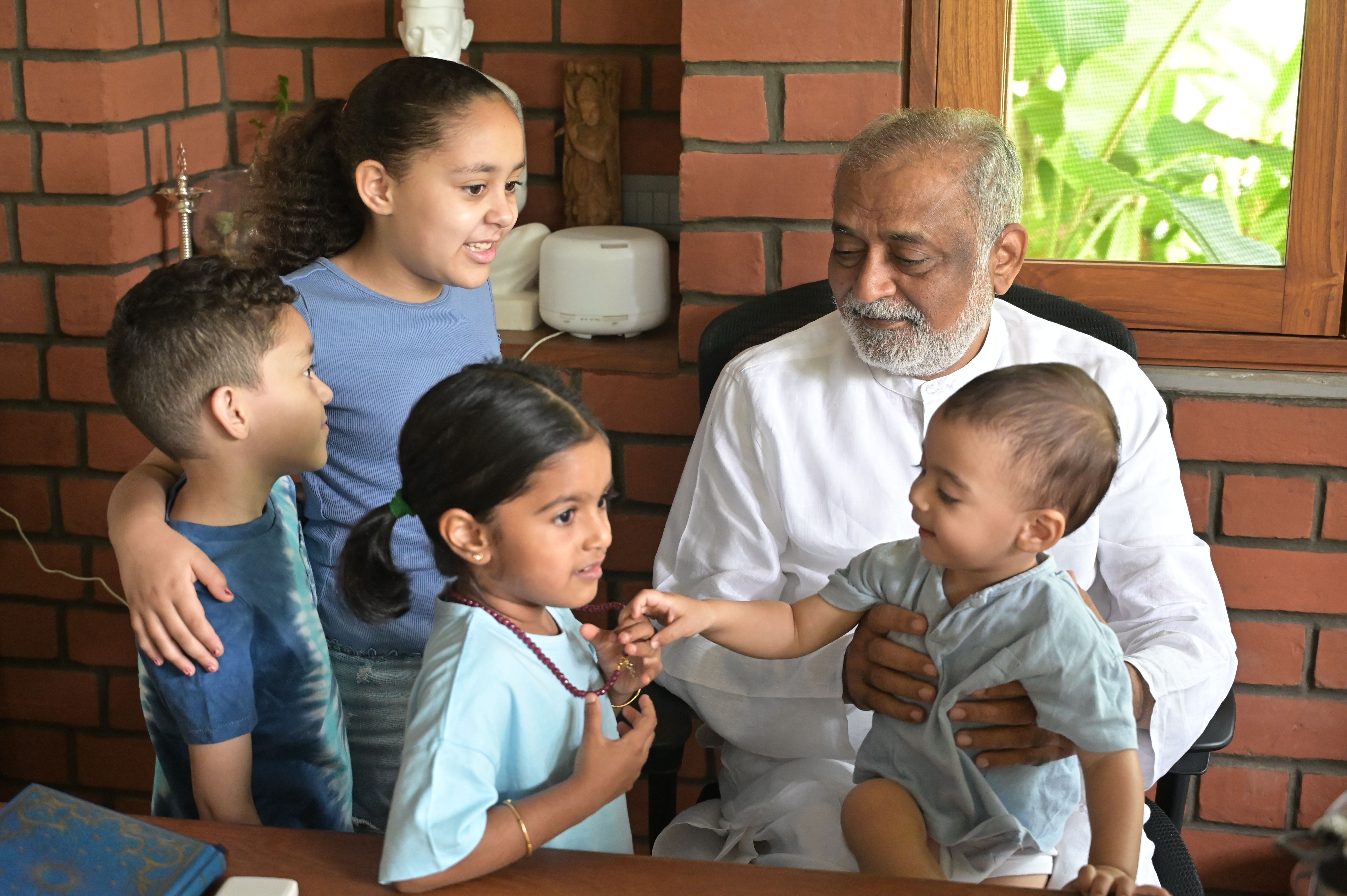 At 5.30 p.m. the physiotherapist, Surekha Banda, came to see Daaji for his routine check-up and exercises.

At 6.15 p.m. Daaji went for a walk in the mini forest surrounding his house and then started off for his office. Between 7 and 7.45 p.m. he met seekers in his office and listened to their queries patiently.

Umakant Kondapure, along with one other person, had a meeting with Daaji regarding KCC. After this, Daaji left for his home.