Daaji asked one of the students to read the chapter ‘My Pain’ from Babuji’s Complete Works, Vol. 2.

After reading two paragraphs, Daaji asked the girl to pause for a few seconds and gently nudged the students to think over what Babuji had written. This pattern of reading, followed by silent reflection, continued for some time. He urged the students to cultivate the habit of reading and encouraged them to read this particular book whenever possible.

Daaji went for a walk at 6.30 a.m., inspecting the health of trees and plants around. He was joined by Sanjay Meherish and his family in his house at 8 a.m.

After breakfast, the group gathered in Daaji’s office and there was a discussion on the chapter ‘My Pain’ from The Complete Works of Ram Chandra, Vol. 2.

Daaji mentioned that Babuji went through a lot of pain and sorrow, and he was fortunate to come under the umbrella of his Master. He stated that there should be restlessness in the seeker for a Guru and that they should be able to sacrifice several lives for the same.

Daaji then asked Samarth Meherish to read the book and suggested that he develop the habit of reading regularly with the youth. He clarified that even elderly people could join the reading group if they wanted to and that all should be welcomed irrespective of whether or not they practiced meditation.

At 9.45 a.m., Narendra Bhura met Daaji along with Rasik Lal. The elderly gentleman had returned from a trip to South Africa and had brought along with him seeds of the African baobab tree. Daaji was very happy to receive the seeds.

Physiotherapist Surekha Banda visited Daaji for his routine check-up and exercises around 10.40 a.m.

At 11.10 a.m., around twenty students from the THLC hostel met Daaji. They were from classes 9 and 10. Daaji walked them through relaxation and conducted meditation for about half an hour. After meditation, Daaji asked one of the students to read the chapter ‘My Pain’ from Babuji’s Complete Works, Vol. 2.

After reading two paragraphs, Daaji asked the girl to pause for a few seconds and gently nudged the students to think over what Babuji had written. This pattern of reading, followed by silent reflection, continued for some time. He urged the students to cultivate the habit of reading and encouraged them to read this particular book whenever possible.

Later, Daaji took all the students to his office and showed them the interactive courses offered on the Heartfulness website:

He played one chapter on his computer and then asked them to enroll for the entire course. He urged them to make it a habit to listen to the audios in their hostel for 10 mins every day after the 9 p.m. prayer for universal brotherhood. He also asked them to share their feedback after they had completed the online course.

Daaji showed the baobab seeds to the students and asked them to count the seeds in each packet. He then showed them the images of the huge trees on his computer.

Daaji inquired Stan about his presentation to scientists. In reply to what Stan shared, Daaji said, “It’s a very powerful argument when you say we are neurologically predisposed to negativity for self-defense and self-survival. Do you teach all that?”

Stan clarified the method of learning. To validate the above argument, he said that the audience would be asked a question like: “Suppose out of the ten things that happened to you today, nine were good and one was bad. When you go back home and talk to your family or your friends, which one are you likely to talk about?”

Daaji chuckled, “The bad one, not the good one. The good ones we forget.” The discussion continued on how the mind, in general, is inclined to absorb and retain the negative rather than the positive.

Daaji gave an example, “Suppose your best friend stole your pen. You would remember it all your life!” He emphasized the importance of cleaning to let go of all the impressions.

The discussion continued till 1.15 p.m., and later Daaji invited the entire group for lunch. After lunch, Daaji warmly bid goodbye to the students and retired to his room to rest. 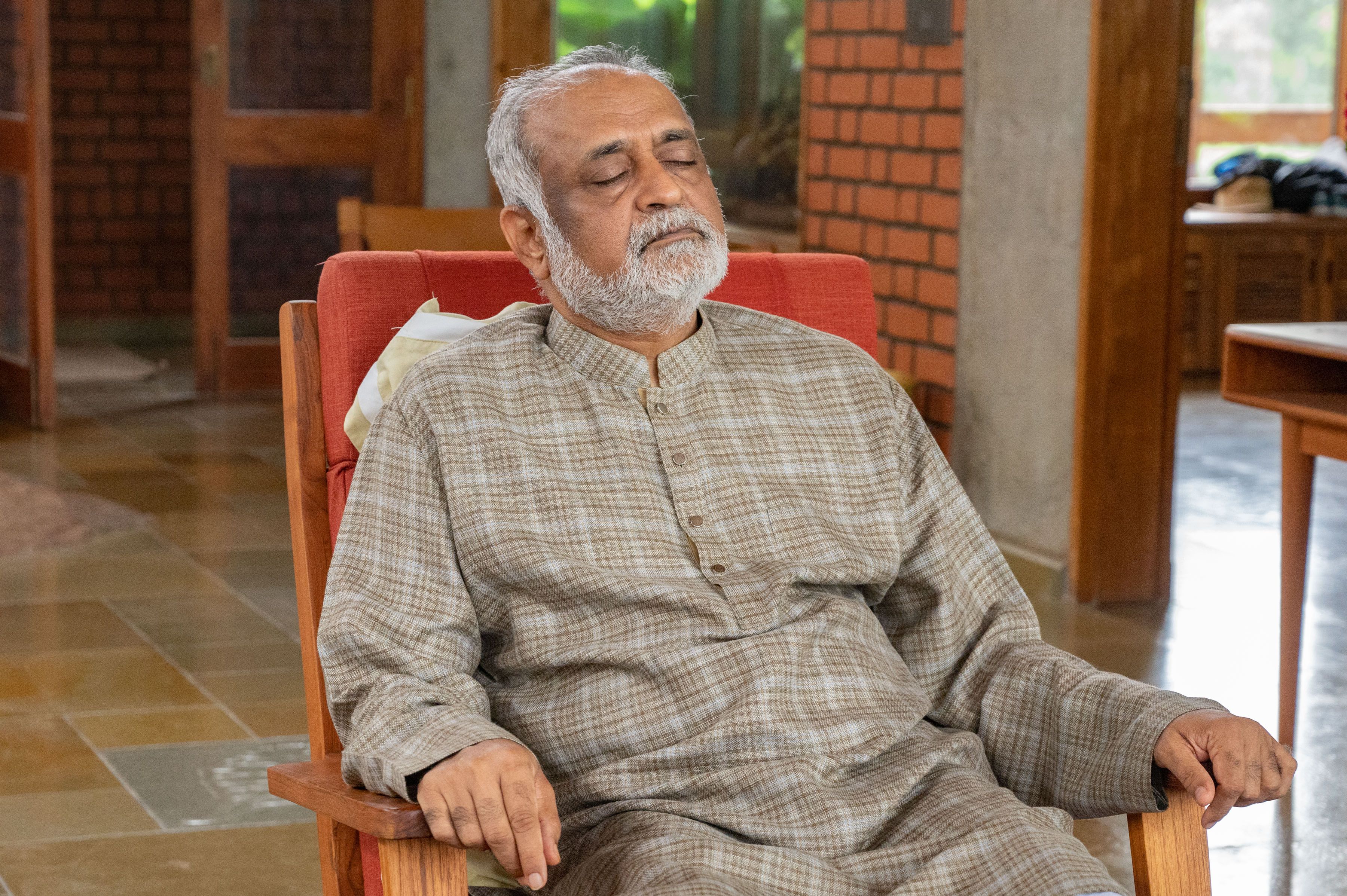 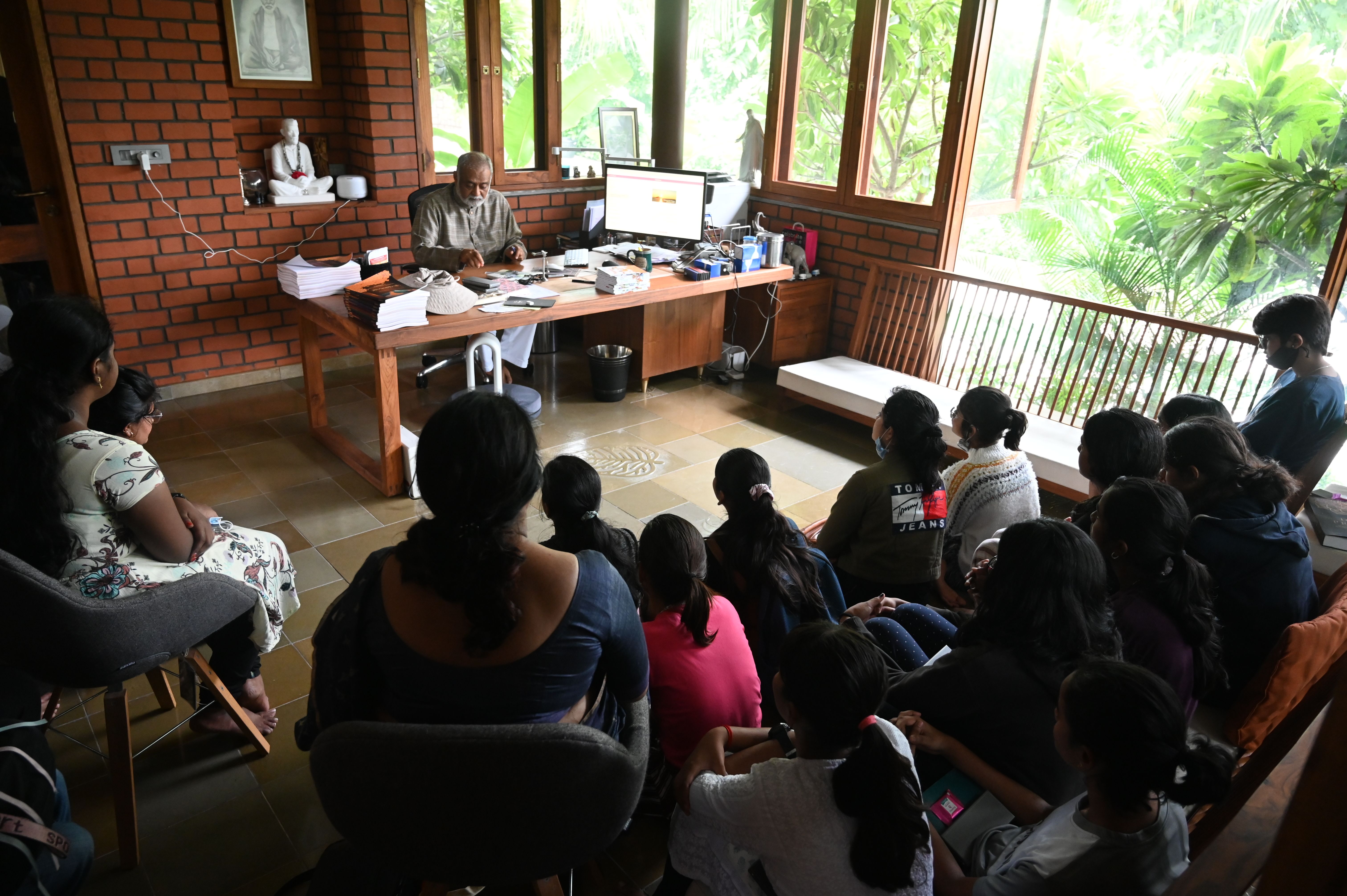 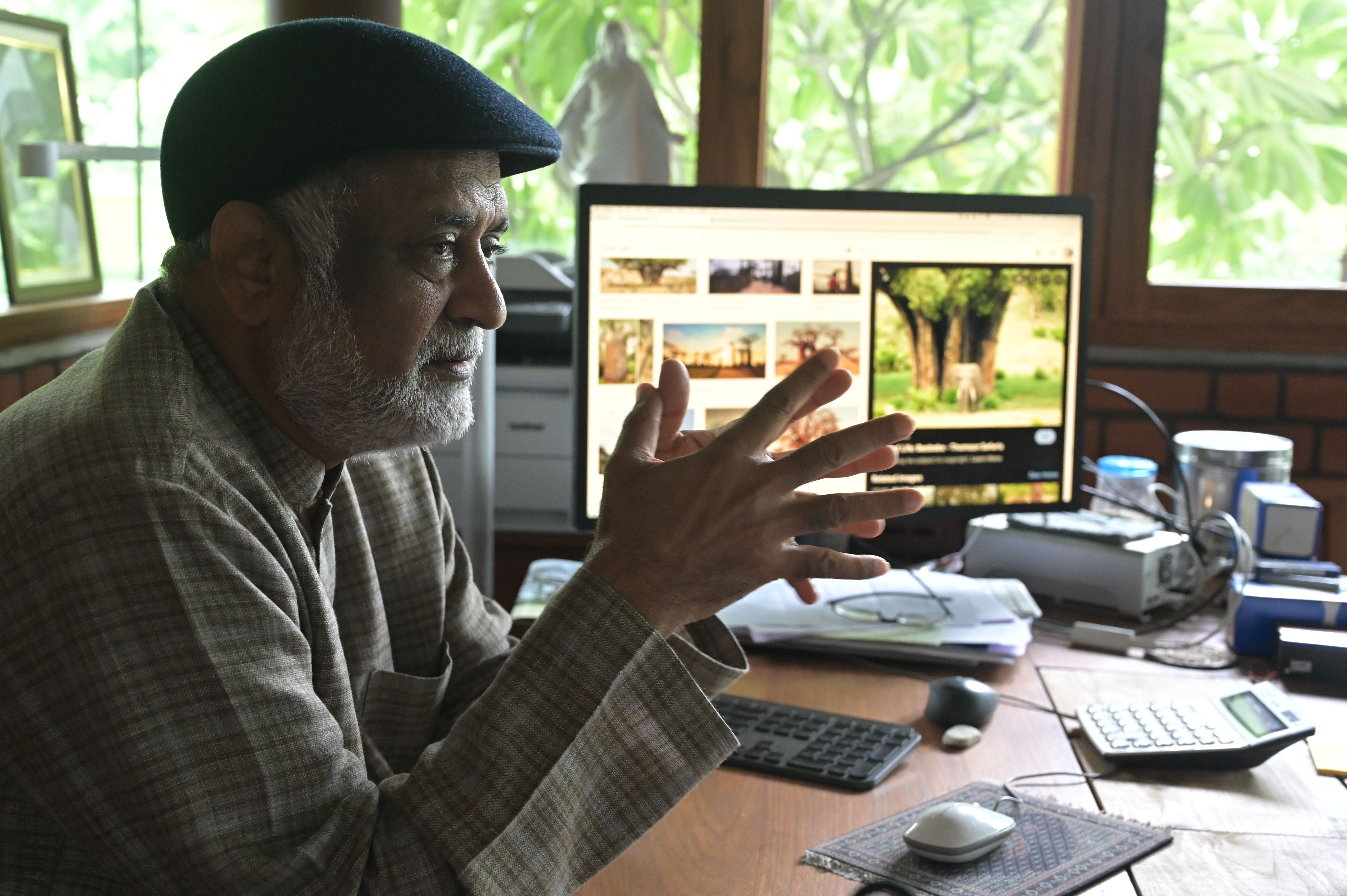 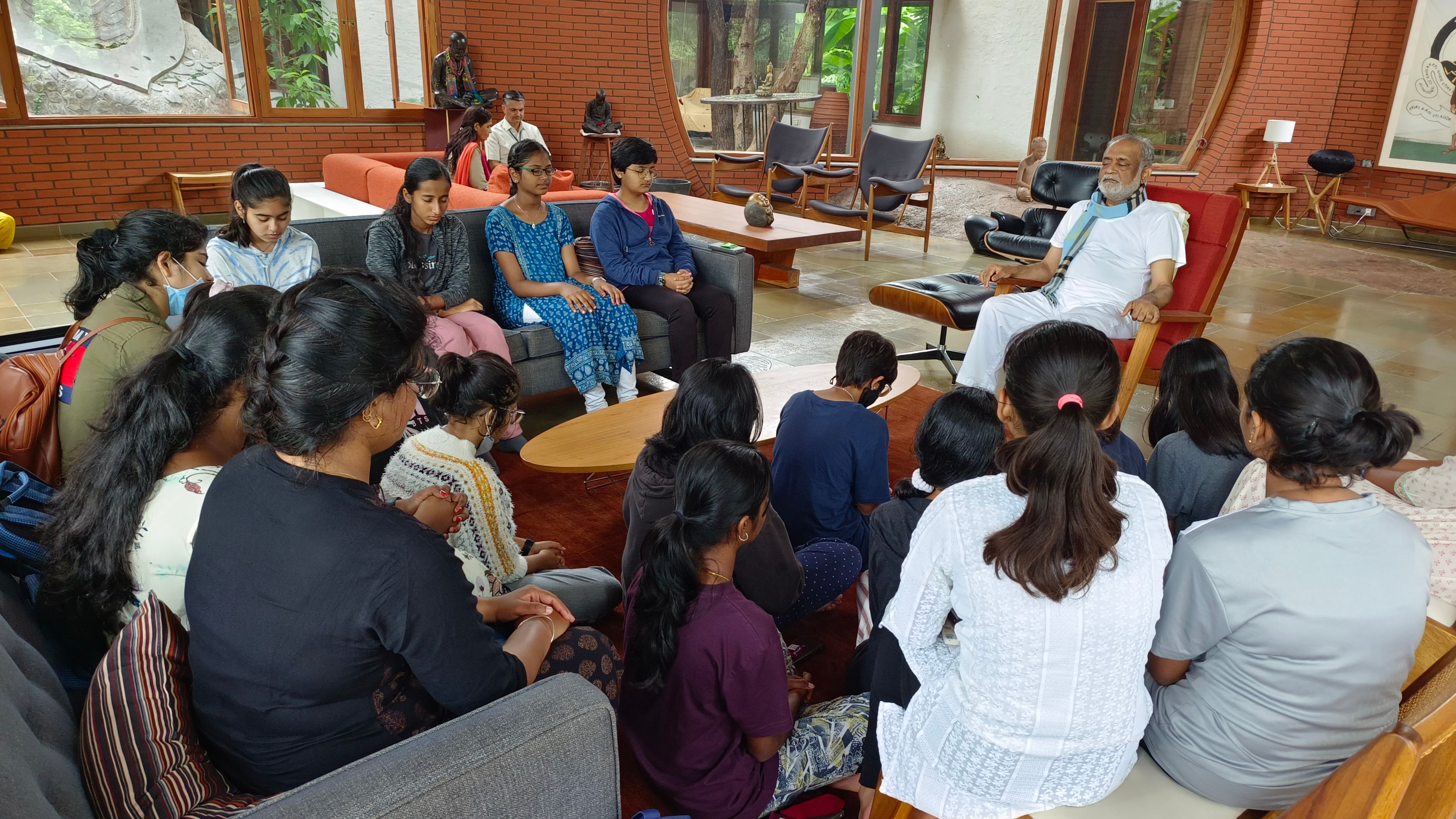 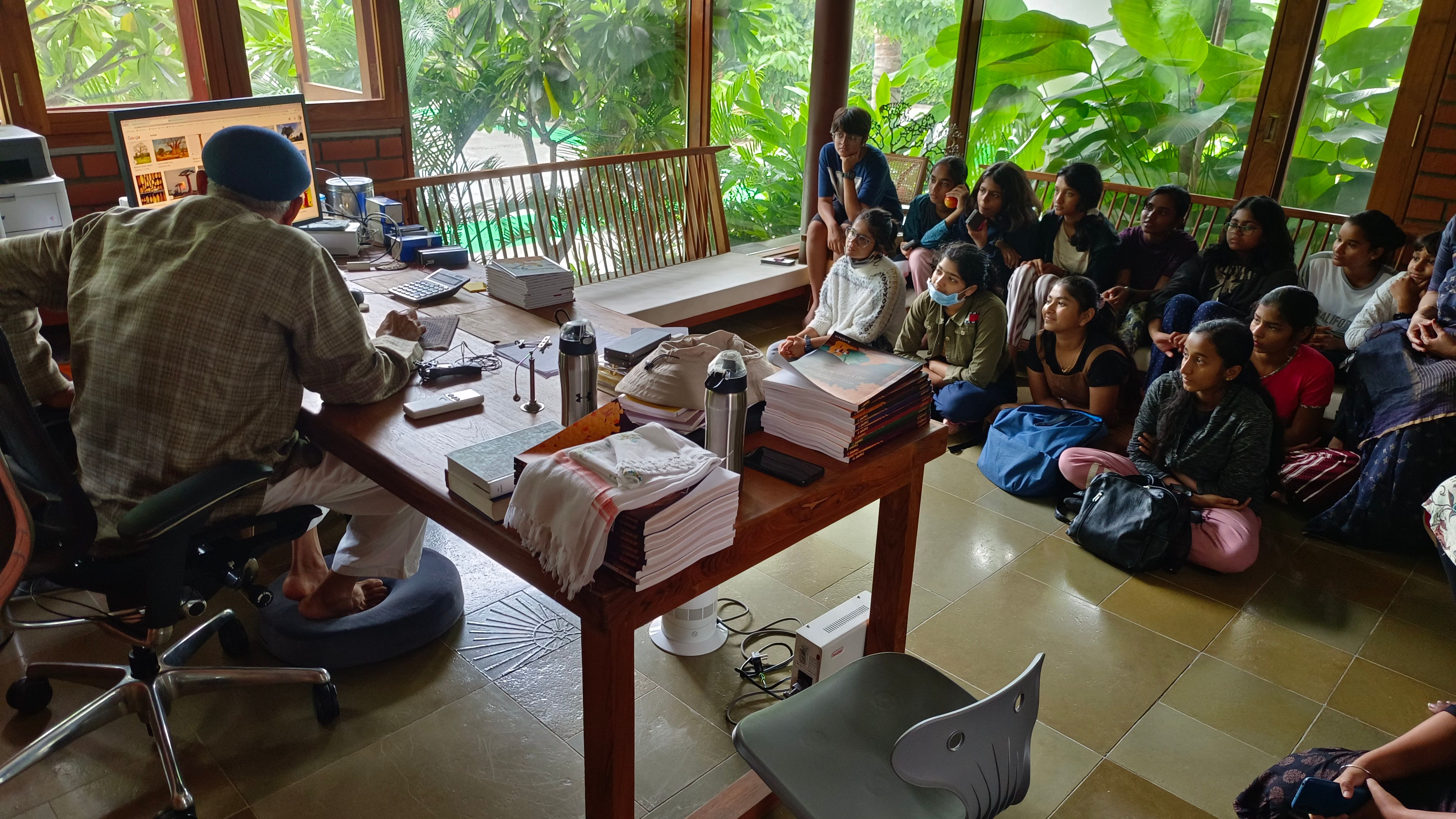 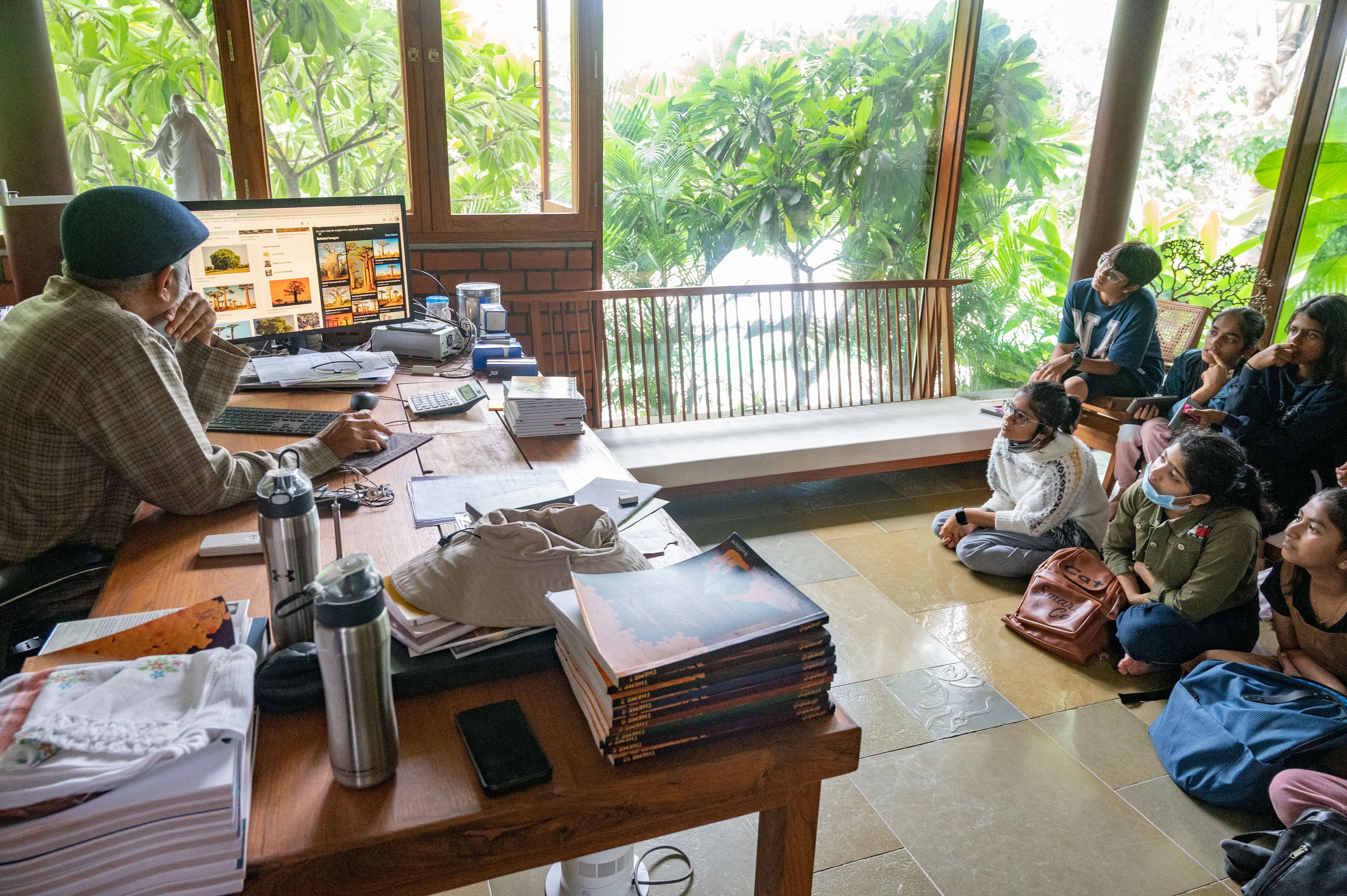 At 6:30 p.m., P. Uday Kumar, IAS, Collector and District Magistrate of Nagarkurnool, met Daaji and joined him for a walk.

A few architects from Mumbai met Daaji at 7 p.m. and discussed a few construction projects.

Daaji asked the group if they could all sit for meditation. Suddenly he sighted the mosquito control team of Kanha through his window: they were sitting and having a discussion with Sahaj Patel. Daaji immediately suggested they go out and meditate along with the team.

Daaji introduced the members of the Kanha mosquito control team to the IAS officer and said they were trying hard to ensure Kanha is free from the menace of mosquitoes.

Then he said to the team, “Today I will give you all a sitting, and you can continue your meeting after the meditation.” He added with a smile, “You will get better ideas after the mediation.”

Daaji conducted meditation between 7.30 and 8 p.m. Afterwards he invited everyone to join him for dinner. 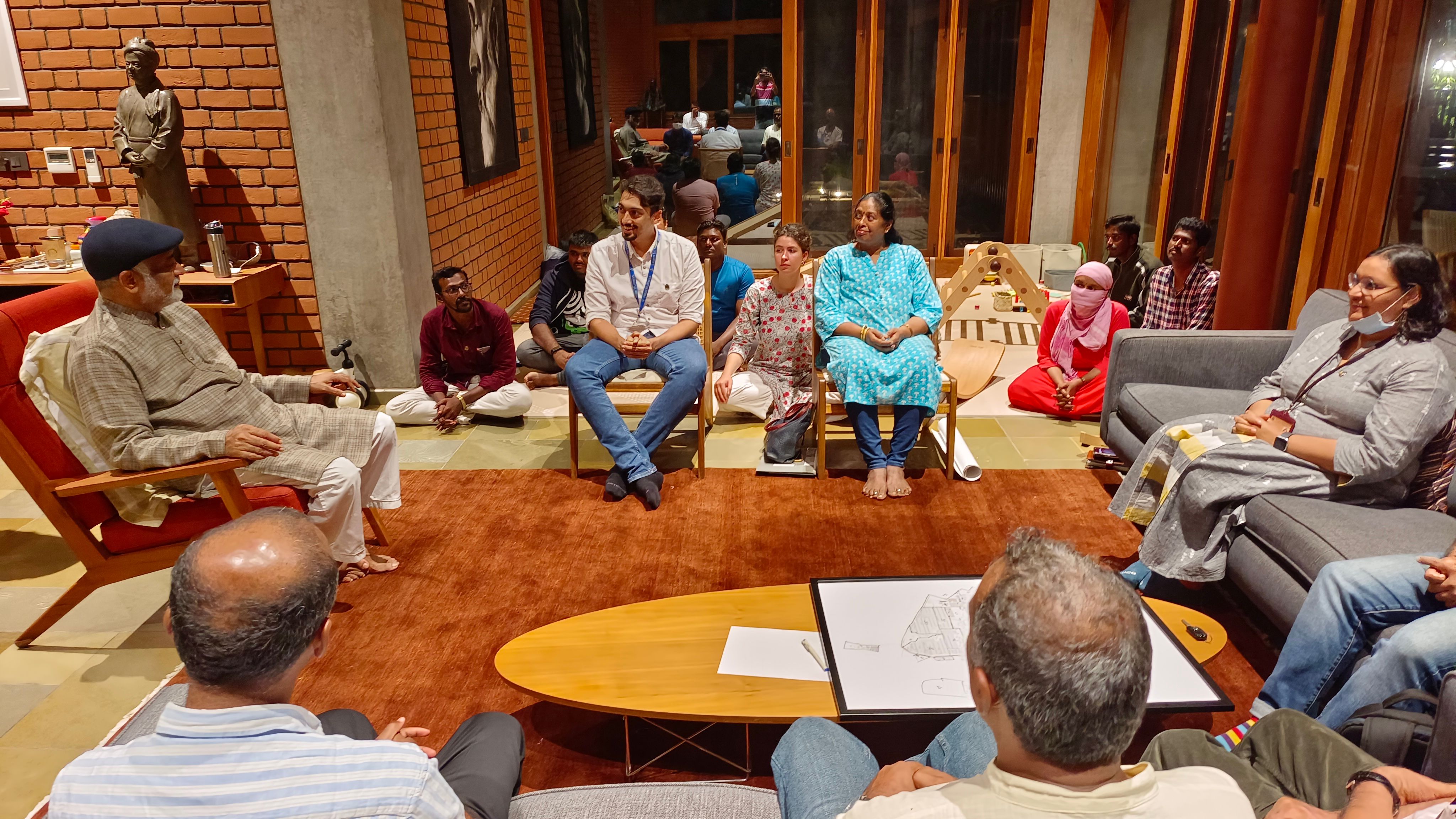 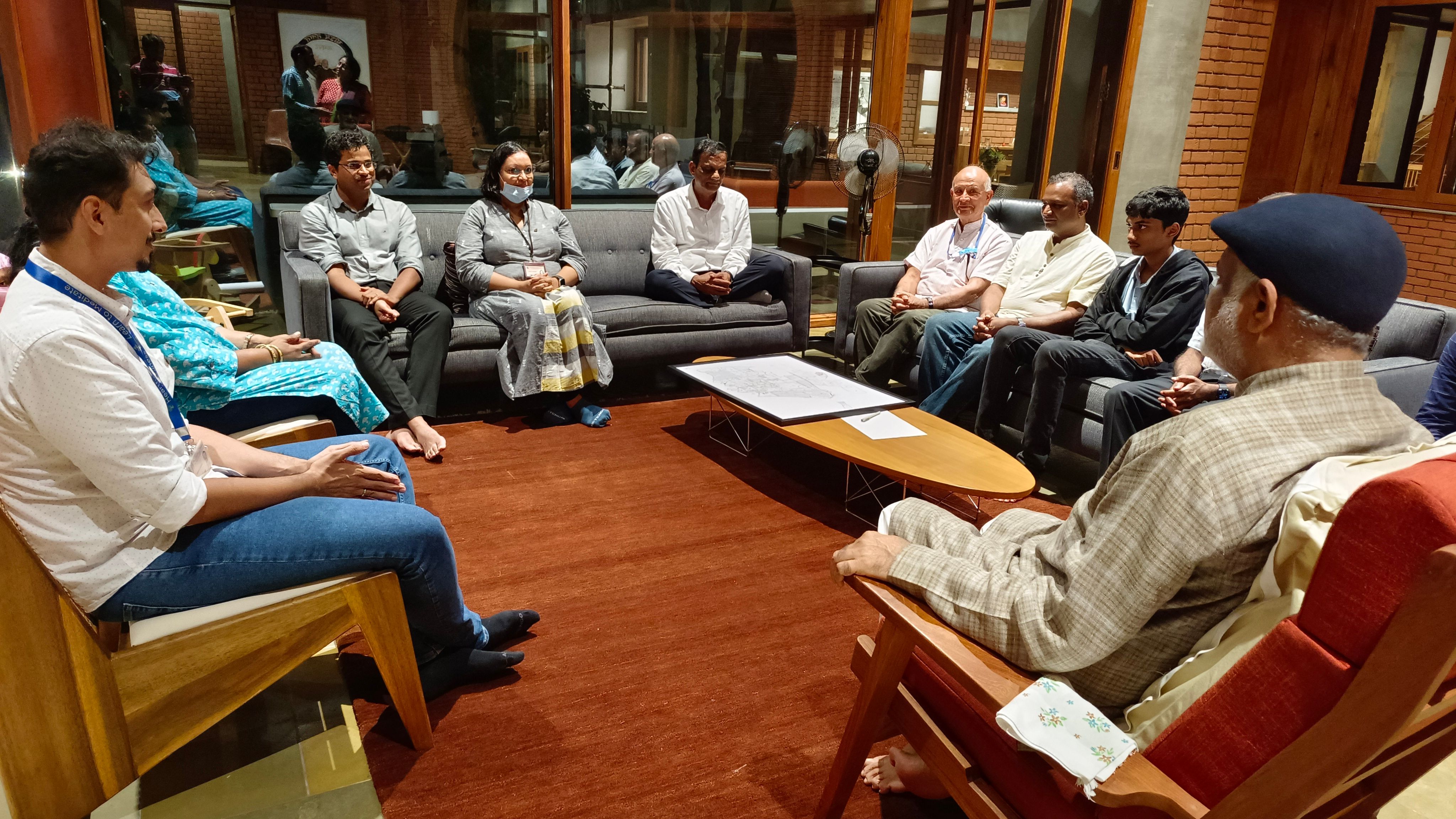 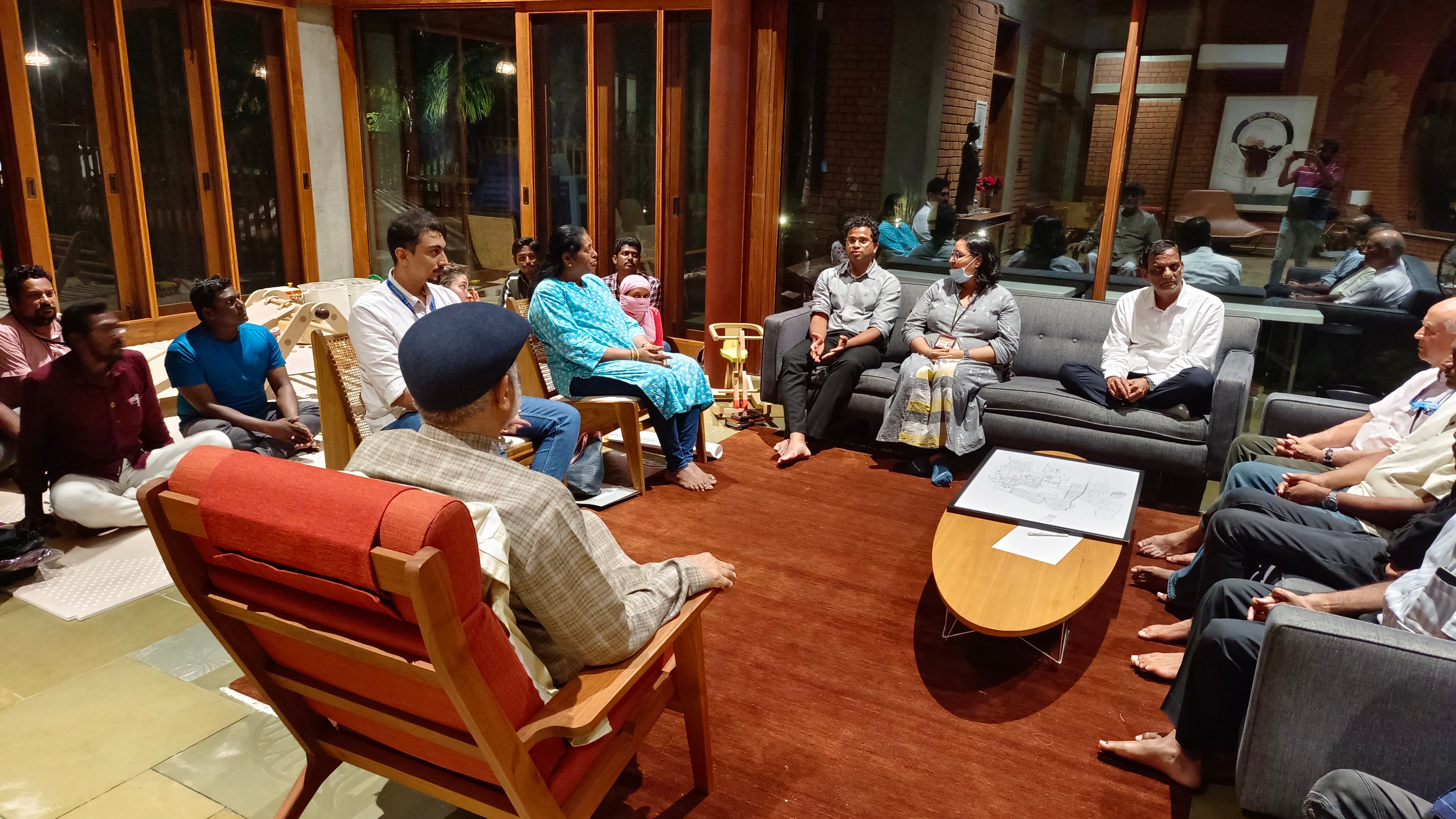 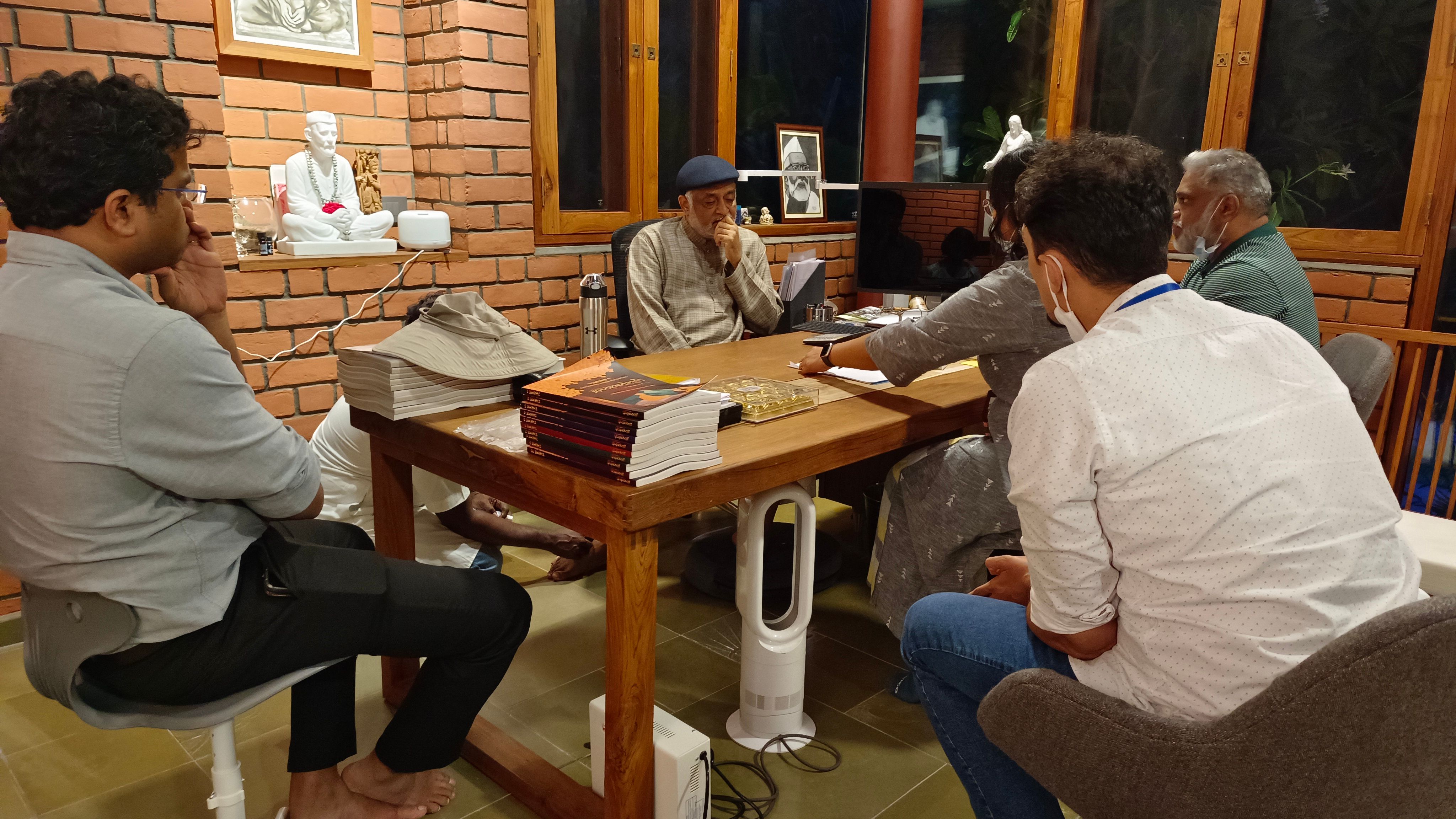