Many names are original like – Arjun and Krishna, they are original names. But later on to create the story and depending upon the characters they did this so as to make people understand better. Many names were changed; many times they even changed the figure, like Hanumanji’s figure. To make people understand his Karma or his mentality, they gave a character, gave the form of a monkey. Monkey has a fixed mentality, whatever occurs to its mind it will definitely do it. They (monkeys) have only one objective and Hanumanji also has only one objective – Ram Chandraji and his service. That is why he was given such a form that people will understand that you should have only one thought, like Hanumanji.

And the name is also so beautiful – Hanu means without Man- who does not care about honor or insult. No ego, he is only in the service of his Malik (lord) and has nothing else. He has only one mind which is why such a form was given to him so that people can understand well that they should become like monkeys. It doesn’t mean anything else that you put a tail, make a monkey. The mentality needs to be changed. Have only one objective in life!”

At 7.30 a.m. Daaji went for a short walk in the area just behind his room.

At 9.30 a.m. Vineet Ranawat, the ashram manager, met Daaji and discussed preparations for the upcoming celebrations at Kanha. This was followed by Sudhir Marwaha’s meeting with Daaji, around 10.15 a.m., regarding construction activities.

At 6.45 p.m. Rajendra Prajapati, a renowned sculptor from Jaipur met Daaji along with Sudhir Marwaha and Deepika Pothuraju, the architect. Rajendraji had brought a statue of Lord Ganesha to show Daaji and seek his suggestions. They discussed the sculptures to be installed at each point in the Yatra Garden, in accordance with the characteristics of the respective point. Daaji suggested that the artist make miniature versions of the statues first.

The discussion moved on to certain characters from the Ramayana and Mahabharata, and how over the ages they had lost their true representation.

Referring to a picture of Hanuman he had recently come across, Rajendra Prajapati mentioned that he was exactly how Daaji had described him to be. At this, Daaji shared Lord Rama’s observations upon meeting Hanuman for the very first time. Lord Rama said to his brother, “Look at his language. What a gentleman he is!”

Daaji went on to reflect that Hanuman was beyond human. In reality, he was a saint, but he had been portrayed as a monkey.

Referring to Mahabharata, Daaji said, “Names like Duryodhana, Dushasana, Dhritrashtra were given at a later point in time based on the character of those human beings. Duryodhana means a rogue warrior; Dushasana means one who doesn’t know how to rule, and Dhritrashtra is one who remains stable on the battlefield. Names like Arjuna and Krishna were retained as per the original. But others were changed depending on the characters so that people understood them better.

“In many instances, even the form or figure of the character was changed. For example, Hanuman was portrayed as a monkey and that gives an idea about his nature or mentality. Monkeys are always focused on one thing. They do exactly what occurs to their mind; they have only one objective. Similarly, Hanuman had only one objective: to serve Lord Rama. He was represented as a monkey over the years so that people understand they need to focus on a single goal.

“The name, Hanuman, is so beautiful. Hanu means ‘without’, and maan means honor or dignity. So Hanuman means one who does not care about honor or insult; one who is without ego. His single-pointed aim was to serve the Lord and he had nothing else in mind.

“To become like Hanuman doesn’t mean that you attach a tail and become a monkey. The mindset has to change by having only one goal in life.”

Talking of Lord Shiva, Daaji said, “He is known as Adi Yogi. Isn’t it? He was a brahmachari [celibate] from the beginning. He was never married, so there is no Parvati. When there is no Parvati, then from where did Lord Ganesha come?”

Referring to the elephant form of Lord Ganesha and its significance at the start of any work, he explained, “Such a form has been created so that our hearts are filled with joy upon seeing it. When we start any work with such delight, we are able to enjoy it. The significance behind keeping the symbol or statue of Lord Ganesh at the time of house warming is that we enter the house with joy. For example, children take delight in having the picture of Mickey Mouse or Donald Duck in their rooms. These are just visual graphics [symbols].”

The topic shifted to astrology. Daaji said, “According to astrology, if snakes or cobras appear in a person’s dream and, instead of being frightened, they feel delighted and play with the snakes, it means they have won over their indriyas [senses]. They are no more a slave of their indriyas. That is the significance of such dreams – that your senses are in your control.”

Daaji then took the sculptor to his room and showed him his collection of statues. He nudged the artist to give special attention to their quality, weight, design, and so on.

Later, the artist and a few others joined Daaji for a walk. This was followed by dinner, after which they called it a day and took leave. 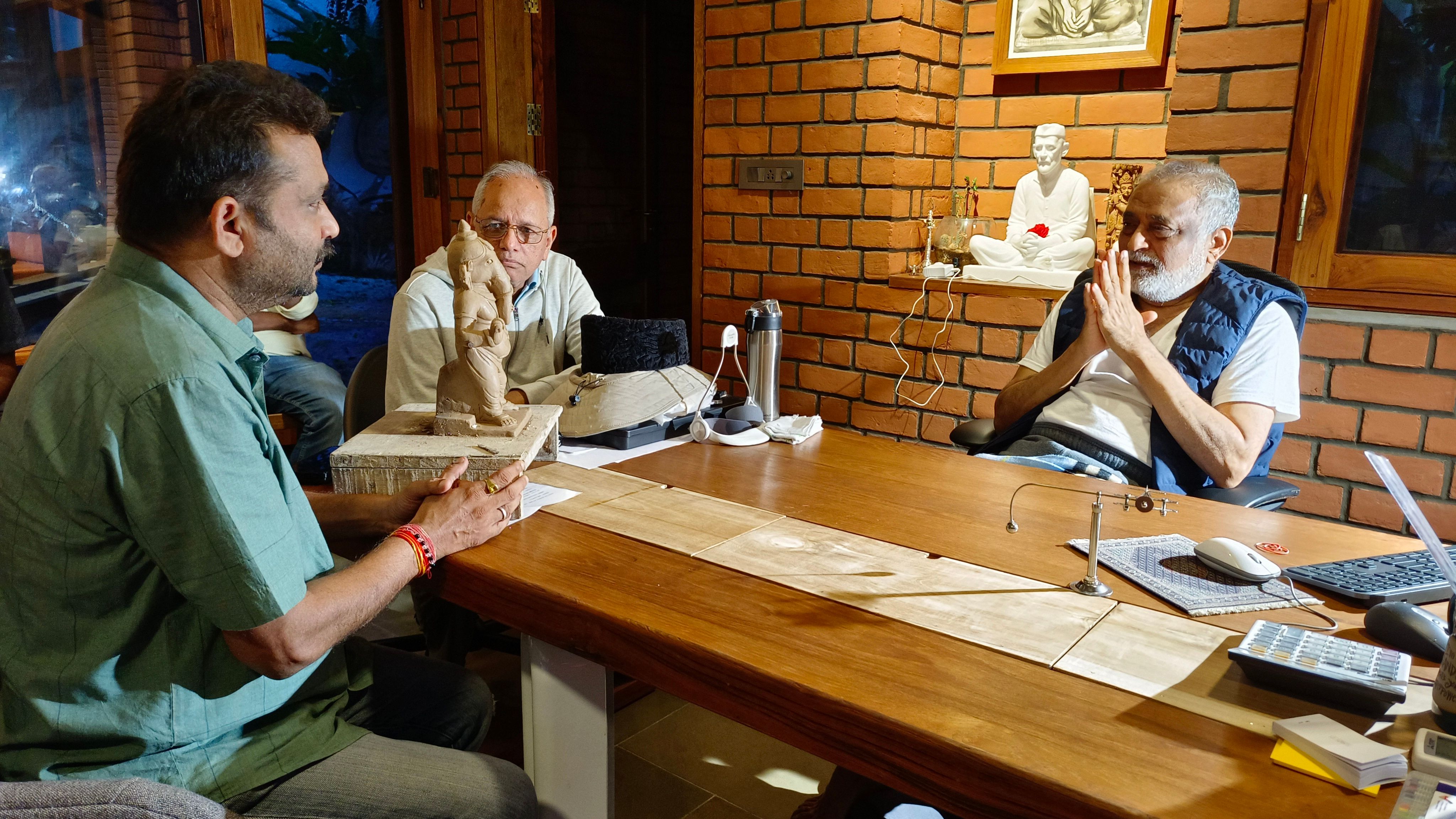 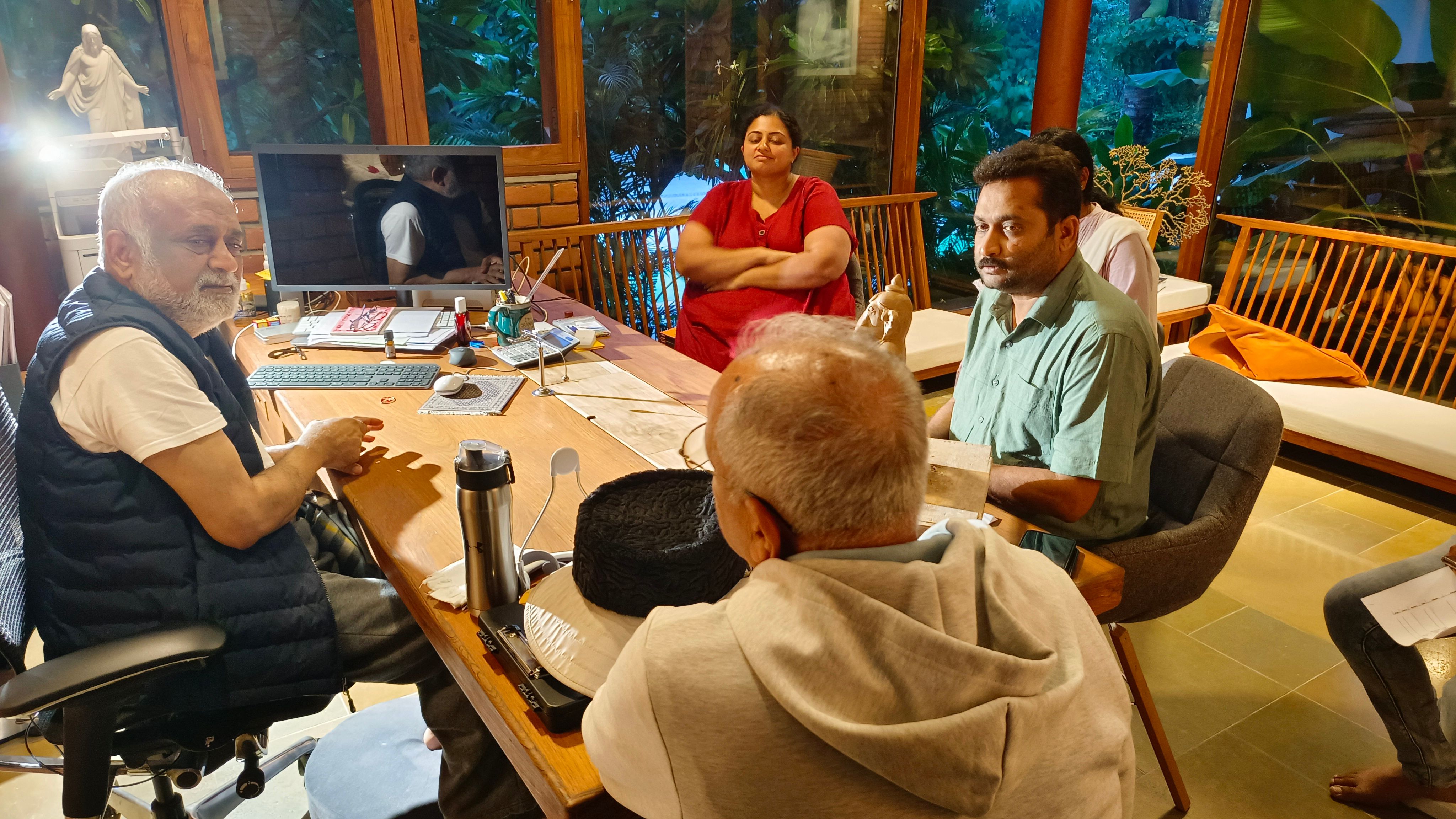 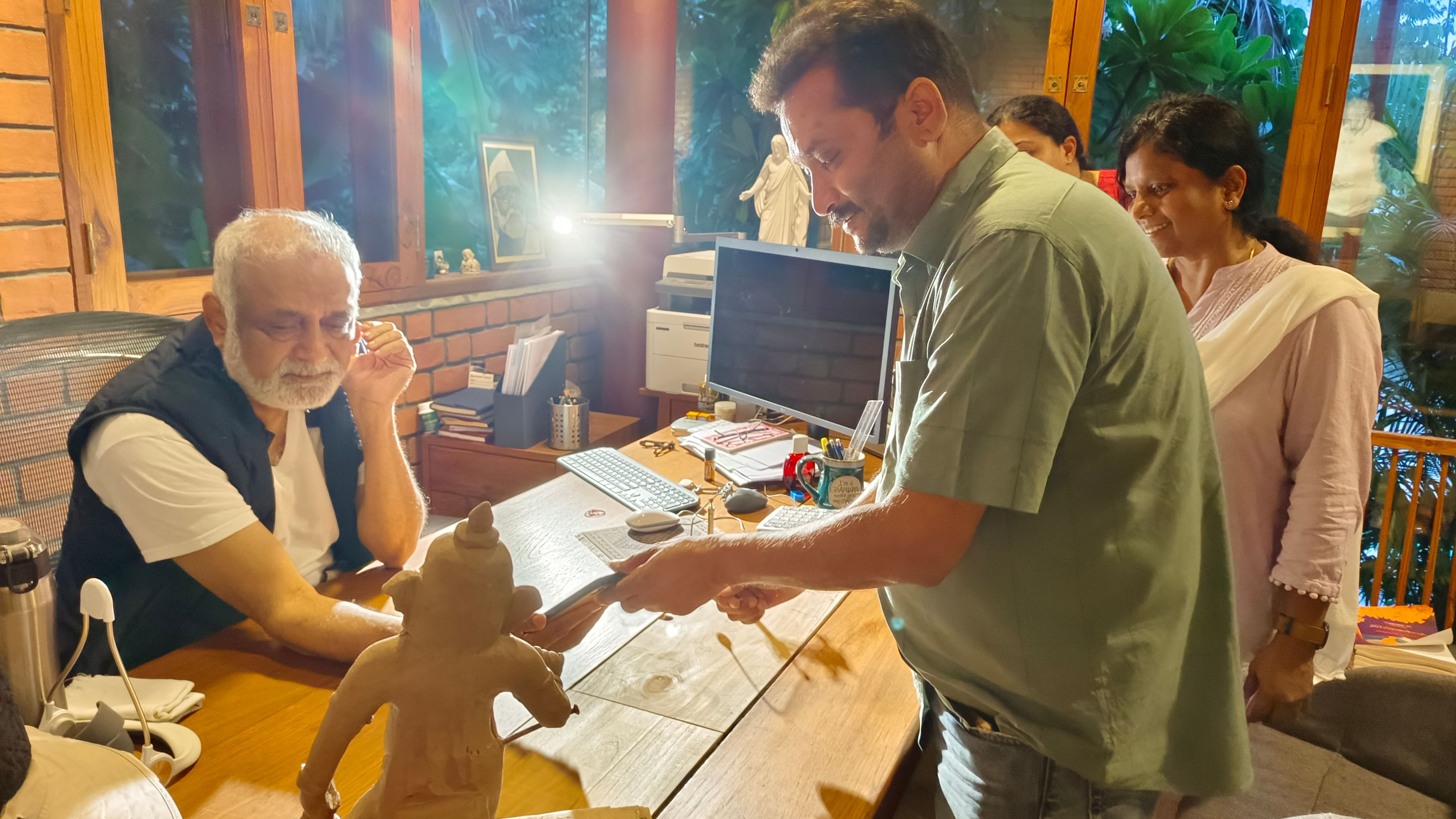 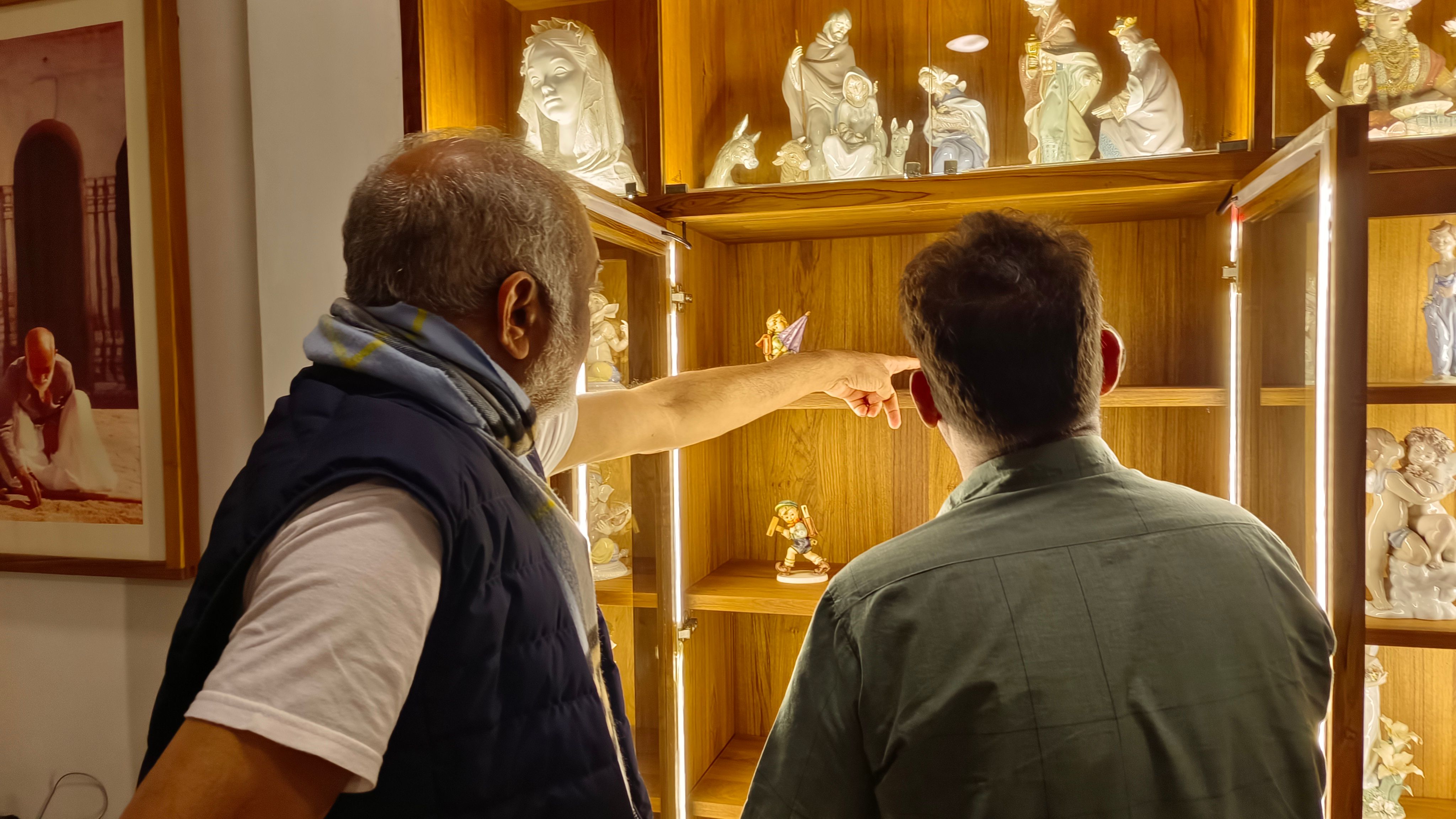 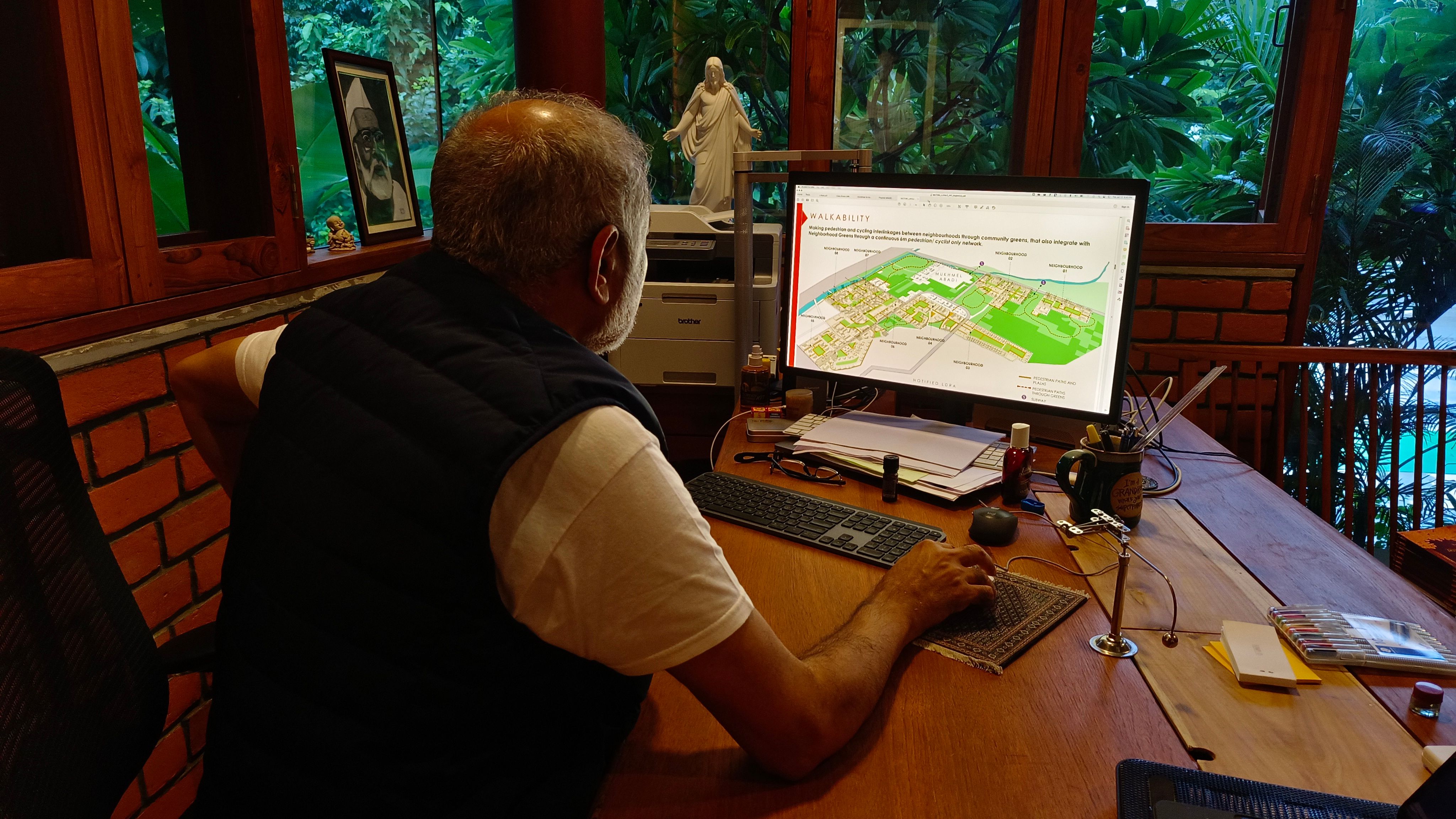